When breast wasn't best: Breastfeeding in Medieval and Tudor England 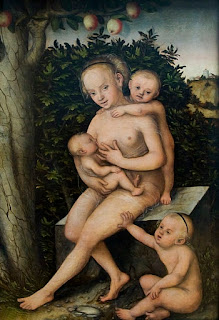 The medieval manuscript “Le Chanson du Chevalier du Cygne et du Godefroid du Bouillon” tells the story of the eleventh century Count Eustace and his wife Ydain, Yde or Ida, who bore him three sons. She was considered unusual for insisting on suckling her babies herself: “never did Countess Yde…suffer that one of her sons… should be suckled by a waiting-woman.” When one boy was fed by another as she attended Mass, she suffered an extreme physical reaction: “all her heart shook” and she fell on a seat in pain, gasping her heart and calling herself a “poor leper.” Then, trembling in a rage, with her face “black as coal with the wrath therein” this “saintly and devout” Countess shook her son until he vomited up his feed. Today, this might be considered abusive; then, it was an example of the behaviour that led to her canonisation! However, not all medieval and Tudor women responded in this way. Yde’s was a fairly extreme reaction and completely atypical of most of her contemporaries’ experiences. Much of the surviving evidence suggests they were keen to pass on their newborns to wet nurses as soon as possible. 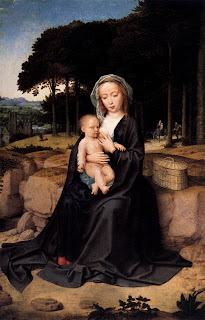 Gerard David, Rest during the Flight to Egypt, ca. 1515, Museo del Prado, Madrid
Breastfeeding in medieval and Tudor times was usually considered an inconvenience. While the nobility and upper class women’s primary function was to produce healthy children, preferably sons, it was not their responsibility to nourish them. That was the job of lower class females. One reason was that medical advice warned against intercourse during lactation, as it “troubled” the milk and might result in a new pregnancy which could cut off the milk supply to the detriment of an existing baby. The church advised against it. Another primary motive for this was the rapid restoration of a woman’s fertility. Breastfeeding provides natural protection against pregnancy by delaying the onset of the menstrual cycle, usually for between six months and a year. The first milk, or colostrum, was initially thought harmful to a child but this did not deter lower class women who tended to follow medical opinion that babies should be fed immediately, for about a year. Also, it was free and convenient. Parish records taken from eight towns and villages in Essex between 1530 and 1600, indicate that the average conception interval between siblings was nine months, supporting the theory that among these poorer families, babies were being breastfed by their mothers. In Little Clacton, few babies were conceived during the months following a live birth: the most common interval was between seven and twelve months, rising to between one and two years. Only around three percent of all conceptions in this group took place under three months since the mother’s lying-in, although the record gives no indication of social class. This small percentage may have represented to local noble families. At South Ockenden, a similar pattern emerges, with subsequent conceptions occurring most between two and three years, then between seven and twelve months: in only two cases out of 114 live births, did conception take place in less than three months. This contraceptive effect is ironic given religious teaching about the adverse effects of copulation during lactation: in reality, many couples appear to have taken advantage of it. 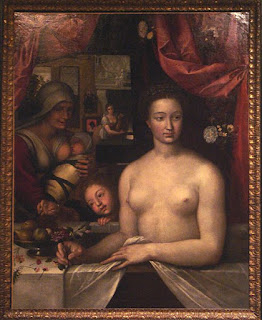 Francois Clouet, mid C16th- possibly Henri II's mistress Diane de Poitiers
For Queens, the handing over of their baby to a wet nurse was not a choice. It was expected that they would resume their duties as soon as possible. Anne Boleyn was unusual in her desire to feed her daughter Elizabeth herself, considering children a blessing: “the greatest consolation in the world,” although even she had to give way to the pressure of her role and Elizabeth was set up in her own establishment at Hatfield. It was common for royal babies to live in completely different palaces from their mothers. Queens and noble woman also had significant duties to perform in terms of the management of the family estates, particularly in the absence of her husband; this could involve everything from domestic management, to receiving local supplicants of visitors, to the defence of her property, as the letters of Margaret Paston prove in the middle of the fifteenth century. Two of Henry VIII’s wives, Catherine of Aragon and Catherine Parr acted as regent in Henry’s absences during his French campaigns.

The regular routine of breastfeeding would incapacitate an otherwise busy Lady and prevent this, thus it was passed to an appointed female, either a household appointment, or a woman in the vicinity. Many were recommended by word of mouth or already known to the family, often having recently borne their own child, although it had to be of the same gender as the nursling. Only the richest could absorb such a nurse into their own family unit or baby’s establishment: most were sent out of the home. In fact, during the first year of their life, most middle and upper class babies were sent out into the houses of strangers, whose suitability was judged almost entirely on their physical appearance. The nurse was considered able to pass on her characteristics to a child through her milk, so her diet was supposed to be good and wholesome, without too much garlic or strong foods; also she was to be of good, placid nature and healthy appearance, with clear skin and no visible afflictions. In royal households, tasters were appointed to check her food was not poisoned or too strong before she ate. Babies were often sent out of cities or towns into the more “wholesome” countryside. Parents sometimes contributed extra to support the wet nurse’s diet or lifestyle. The doctor John Dee made additional payments towards such essential items as soap and candles for those women suckling his children in the 1570s. Their vulnerability was also recognised: arrangements were speedily made for the transference of children from one place to another when illness or plague came close. 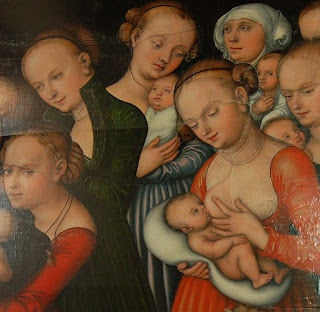 Sadly, many cases are recorded in the parish registers of the death of such children, listed either by name or as “a nursling child.” In the parish of Good Easter, Essex, the burial of Henry Coot, a nurse child of Chelmsford, was recorded on April 18 1590 and that of Thomas Watt on 28 November 1596. “Dorrothe Person, a nurse child of London” was buried at Chelmsford on July 11 1550, while in the parish of St Mary Magdalene, Great Bursted, Essex, the burial was recorded of an unnamed nursling child in 1599 “being a man chylde of a saylors;” the names of the mothers and the village wet nurses are not listed. Deservedly or not, by Elizabethan times, wet nurses had a reputation for carelessness. Infant mortality was high anyway, with the first year of life proving the most perilous but it has been estimated that the death rate for babies sent out to be nursed was double that of those fed by their mothers. The reasons for this may be complex: poor diet, health and living conditions among the lower classes may be to blame, additionally, wet nurses may have been dividing their attention and their milk, between multiple charges. The stereotype of the exhausted or drunken nurse, falling asleep and “overlaying” a child during feeding, found much support in late sixteenth and early seventeenth century broadsheets and pamphlets, as did the trope of the wicked woman, murdering infants in her charge whilst continuing to be paid for their services.

Undoubtedly, though, many wet nurses cared for other women’s babies diligently and with affection. Folklore remedies had advice to offer the breastfeeding woman; she should wear a gold or steel chain to stop milk curdling and to aid her milk flow, she should sip milk of a cow of a single colour, then spit it out into running water, swallow a mouthful of that water and recite a charm. Receipt books drew on local herbs and ingredients accessible in a domestic context to make poultices and dressings. Mallow and the bitter wormwood, also used for weaning, were considered most efficacious. If milk was lacking, or feeding proved difficult, babies were fed with animal milk, sucked from rags or through drinking horns. When a mother was unavailable, ill, poor, dissolute or deceased, the parish took charge of the infant’s nursing, drawing from what must have been a pool of suitable women: it was important though, that the child was supported at the location of its birth, for around a year. Boys were often suckled for longer than girls though, possibly even up to two years, as they were considered less independent. After the year had passed, such infants might remain with the nurse or else be placed in the parish. Many children retained affection for those who suckled or nursed them, later into life, remembering them with gifts or in their wills. During this time, they may have little contact with their birth family, returning to their parents’ home as a little stranger. Where such women were members of the household, they then became governesses or assisted in raising the children in other ways. Perhaps the most famous literary example is Juliet’s nurse, who has been a constant through the heroine’s fourteen years and appears closer to her than her own distant mother. 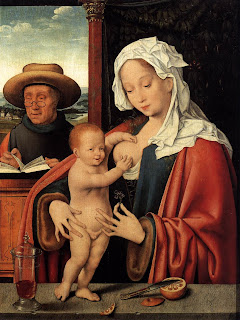 Joos van Cleve, The Holy Family, ca. 1515, Akademie der bildenden Künste, Vienna
In the past, the case has been made that this attitude towards breastfeeding was one of the contributing factors towards distance in parent-child relations in the past. This has been successfully challenged by historians, recognising that it is anachronistic to apply our pedagogical standards to the cultures of other centuries. In fact, medieval and Tudor parents would have considered themselves to have made excellent provision for their babies by arranging a suitable wet nurse and there are many cases, such as John Dee and his wife, of great care being taken to provide for and safeguard both. Modern attitudes towards breastfeeding may have changed but ironically, they put the twentieth century breastfeeding mother closer in experience to poorer women of the past.