This coming December, I'm going to be offering a few guest slots on my blog. If you are an unpublished, aspiring historian or simply have a passion for history and would like to write a piece on a topic of your choice, it could published here and shared for a wide audience.

The topic is up to you, whatever you find fascinating: it can be an article or review, about a person, place, event, book, or theme, with the focus on women's history. I'm looking for pieces around 500-1,000 words but will consider longer ones too. If you're interested, send me a reply telling me in a sentence or two what you'd like to write about and why.

I look forward to hearing your ideas.
Posted by Amy Licence at 04:28 10 comments:

A Modernist Voice from the Warsaw Ghetto 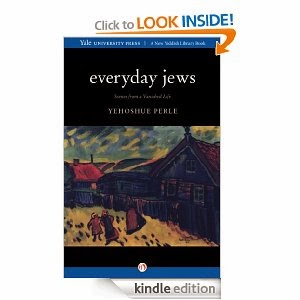 Hailed as a modern Yiddish masterpiece and dismissed as too bleak to be possible, this new translation of Perle’s 1935 autobiographical novel Everyday Jews belongs in the same tradition as Gorky’s My Childhood and Joyce’s Dubliners.


Exploring the harsh reality of life for a poor family in a provincial Polish town around the year 1900, this story’s focus and subject certainly place it within the remit of literary modernism but not at its heart. Direct and unblinking, it looks the conditions of poverty and abuse in the eye; the terrible snow storm in which the adolescent narrator passes out, his parents’ dysfunctional relationship and the older women who seduce him. It is bleak and shocking. Like Dubliners it captures a dying way of life, wrapping up family occasions and customs in a sort of breathless stasis that some readers may find suffocating.


And yet it is compelling, in a grim sort of way. The writing is lucid and accessible and Perle carries the reader through the various miserable scenes of his early existence with ease. Dostoevskian in places, its imagery and description are simply yet powerfully constructed, building symbolic landscapes of misery.  In the Joycean model, though, it is more a collection of still lifes than a progressive narrative. There is little development beyond the passage of time; the dumb mute peasant figure stumbles on, little understanding his destiny or actions. We see the family constrained by customs, such as the day permitted for house removals or oppressed by the pictures hung in the house they have rented from Christians. Only at the end, very briefly, does Perle suddenly open a door, telling us that something had changed for his narrator, some rite of passage had been reached. Yet this remains unclarified and signals the book’s abrupt end.


The characters may not undergo much of a developmental arc but they are vividly depicted, perhaps mostly so in the case of his mother, with her nostalgia for her first marriage and civilised city life, her soft double chin and ebony wigs with a curl on the forehead. Her spirit continues to reassert itself, fighting against the conditions into which she considers she has fallen and the aspirations she still entertains. Easily the most compelling figure of the book, she is exceptional amongst the other characters in the depth of her portrayal, as we see her pragmatism when faced by her step-daughter’s miscarriage, then dancing with pride at the girl’s wedding. The continual struggle between husband and wife, the ongoing battle of man and woman, does not descend into a simple gender battle but is delineated as one part of a complicated and compelling marriage. Among their extended family, what emerges here is a sense of shared destiny, through good and bad.


As an insight, a mirror held up to a lost way of life, this book is fascinating and does have real literary merit but read it as a series of vignettes of poverty in early Twentieth century Poland, a reflection of life and character rather than an analysis. It works best as a series of sketches rather than as a novel. Perhaps in this element of its style, as well as its subject matter, it comes closest to being a Modernist text.


Perle was a fascinating figure, born in 1888 and dying in the Warsaw ghetto in 1943. He published Everyday Jews in 1935, looking back to memories of his childhood as Europe's decade was darkening. Those early criticisms, that the book was too bleak to be psychologically believable are unfounded; placed in the Modernist tradition it fits like a missing jigsaw piece. This new translation captures a bleakness and constant struggle for survival that will be like a slap in the face for the twenty-first century reader.