Catherine of Aragon's Spanish sisters: A swathe of widows.

Is there a collective noun for widows ? Perhaps a “misfortune,” “swathe” or “veil” might be appropriate ? In late Fifteenth and early Sixteenth century Spain, the death rate of young married men in Catherine of Aragon’s  circle, might have led to the Castile-Aragon alliance being known as a “family” of widows. Of Ferdinand and Isabella’s four daughters, three lost their husbands young, as did her sister-in-law and their passionate, dramatic displays of grief made their losses almost an art form. 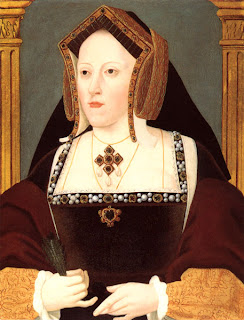 Catherine as the wife of Henry VIII
Catherine’s first marriage was the root of all her later problems; her divorce and Henry VIII’s break from Rome and establishment of the Church of England. She was born in 1485, to the formidable military alliance made by the marriage of two of the most powerful Spanish strongholds and lived among the pomp and ceremony of their ritualistic court. Married before her sixteenth birthday to Henry VII’s eldest son Arthur, she crossed the channel from the hot, dry homelands of her childhood into the damp, wet English climate that was to plague her ever since. She was plump-faced and pretty, with long auburn hair and caused a sensation with her foreign fashions and habits. As the heir to the Tudor dynasty, fourteen-year-old Arthur was the image of his father; dark haired, slender and sensitive looking, groomed for the throne since an early age. Their union was celebrated in style in November 1501. Both were dressed, unusually for the time, in white and paraded on a platform erected in Westminster Abbey for all to see. The pageantry, festivities and feasting, indicated the hopes that the royal family and country invested in them, as the parents of future monarchs. Then, in the middle of winter, the pair set off for the formidable castle at Ludlow, which as Prince of Wales, was to be Arthur’s seat. The journey took until mid-January. By April, the young prince was dead, possibly of an outbreak of the dreaded sweating sickness that took hold in the area, possibly of tuberculosis. 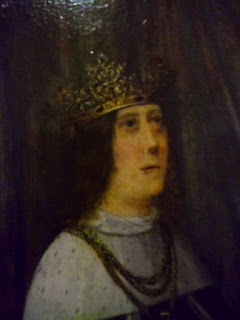 Prince Arthur
Catherine’s taste of marriage had been brief. Returning to London, she remained in poverty for the next seven years, subject to the will of Henry VII. Ill herself, she was grieved at the death of her young husband yet their life together had been short and according to her, unconsummated. Raised to be a queen, she became the pawn between Spain and England, as her father and father-in-law wrangled over the payment of her dowry and her alliance with her young brother-in-law, the new heir of England, the future Henry VIII. Through the following years, the widowed princess was denied food and money, having to sell her plate and other valuables in order to feed her household and suffering constant poor health. Catherine’s letters speak of her humiliation and penury: it was an undignified and uncertain time. Only the death of the King in April 1509 freed her. Now all depended on the intentions of a young man who only years before had repudiated all plans of their marriage. Yet marry they did. That June, at Greenwich, Catherine became the first wife of Henry VIII and two weeks later, was crowned Queen of England. It seemed like all her hopes had come true. She could not know how twenty years later, her first, short-lived marriage would come back to haunt her.
Catherine’s sisters had similar misfortunes with their first husbands. Eldest of the family, Isabella, married King Alfonso of Portugal at the age of twenty and left her Spanish home. Her reception was magnificent, with theatrical feasts and much ceremony but the celebrations were short-lived. After only seven months of marriage, the young husband was killed in a freak accident when thrown from his horse. Isabella was heart-broken. She cut off her hair and adopted all-black clothing and returned home, no longer the sister Catherine had known. Thin and weeping, she adjured all court entertainments and determined to dedicate her life to God and never marry again, so she would not suffer any other such terrible bereavement. Portugal was left with a new heir, Prince Manuel, who offered her his hand in marriage, which Isabella steadfastly refused, maintaining her dramatic mourning. Her parents were openly sympathetic but quietly persuasive and eventually, Isabella was induced to remarry for the sake of her country. Six years later, she married Manuel and became Queen of Portugal, only to die shortly after giving birth. Her younger sister Maria then went on to marry Manuel and bear him two children. 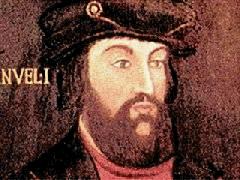 King Manuel of Portugal
At the same time as Isabella’s fated second match, her brother Juan, heir to the Aragon-Castile alliance, was getting married. His bride was the beautiful seventeen-year-old Margaret of Burgundy, arranged as a dual match between the two nations: as Margaret travelled to Spain, Catherine’s other sister Juana would replace her in the Netherlands as the bride of Margaret’s brother. Margaret landed at Santander in March 1497 and the whole family were delighted by her looks, intellect and high spirits. Juan was enchanted by her and the pair became quickly inseparable. They were married a month later and quickly consummated their match, with what quickly became a physical obsession: doctors warned the pair to slow down as there were fears for the effects on their health of such an intense and passionate union. Their fears for the nineteen-year-old were proven correct, even if their reasoning was suspect. Journeying into Portugal, the young man fell ill. His father rushed to his side to find him feverish and preparing for death. Six months after his wedding, Juan was dead, Shortly after, to compound the family’s grief, Margaret miscarried.
The final sister, Juana, scarcely fared better. Arriving in Burgundy, she was instantly attracted to her new husband, known as Philip the Fair or Philip the Handsome. The teenagers’ wedding was brought forward a week, as the groom felt unable to wait to consummate his passion. Initially happy, Juana soon learned that she was not the exclusive recipient of his attentions and her subsequent life with him was one of increasing control and denial. His tight hold over her household and routine did not allow her the autonomy her position required: she was subject to him in all aspects of her life, controlled and neglected in equal measure. He sent her women home and replaced them with those of his own choosing and tried to sow discord between her and her family. Eventually, she was living in seclusion. Denied any form of retaliation, she resorted to tantrums and tears, which increasingly earned her the reputation of instability: her obsessive love for him never faltered and although they were later to live apart, she remained a dutiful wife, placing his wishes above the needs of her and her family. 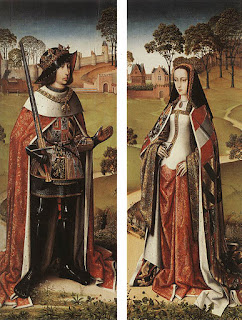 Philip and Juana
Juana conceived quickly and bore five children between 1498 and 1505. Towards the end of the marriage, Philip tried to promote her reputation for insanity and have her incarcerated yet she was saved when, unexpectedly, in September 1506, he became violently ill and died. Pregnant with her sixth child, Juana might have been relieved to be free of his strictures but her subsequent behaviour showed the depth of the passion she still retained for him. She retired for weeks, refusing to see anyone or conduct any important court business before ordering the embalmed corpse to be carried with her on a long journey back to Granada, to rest beside the body of her mother. Her refusal to leave the coffin, even when it meant she had to give birth in a village along the way, quickly reignited rumours of her insanity. It was whispered that she refused to allow any other women near his body and would open the coffin to kiss his feet: whether these odd tales were true or not, they earned her the name of “Juana the Mad.” She did not remarry, in spite of overtures made by the widowed Henry VII of England in 1506, in a bizarre proposition that would have seen her becoming her sister Catherine’s mother-in-law. She fought for the inheritance of her children and was the longest lived of all the sisters, dying in 1557.
The losses suffered by the Spanish royal family were higher than the contemporary average. The misfortunes met by their young women in the losses of their husbands are a reminder of the fragility of life even among the most privileged and the tenuous nature of dynastic inheritance. A swathe of widows was created by these untimely losses but also, a number of the potential rulers of Sixteenth century Europe were lost. Only speculation can answer the questions of how the course of history may have been different if these unfortunate young husbands had lived to maturity, not least with the advent of King Arthur in England.
Posted by Amy Licence at 10:47