As this is now available free on Amazon as a Kindle preview, I thought I would share the introduction to my latest book on here too. You are most welcome to have a look, make comments and decide whether it is for you: 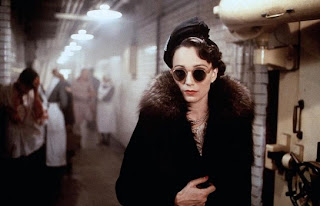 Introduction
Act One, Scene Two. The air is hazy. The room seems to be part medical, part industrial, yet there is a sense of neglect and disrepair. Tiles line the walls and a man in a long white coat stands with his back to the camera, busy over his work. A couple of brown glass bottles and a wooden crutch are visible in the foreground on the right. Rays of opaque light stream through the windows creating a sort of misty underworld. Discordant jazz plays, low and melancholy.


The double doors in the middle of the scene open and she appears. Only a dark silhouette at first, she steps into the room; a slim young woman dressed in a black coat with a large fur collar, glamorous with her lipstick, pearls, heels and dark glasses. Yet it is clear from her demeanour that she is in mourning. Reaching behind her, she pulls the door firmly shut before the camera draws close, foregrounding her face as she removes her glasses. Her expression is an uneasy mixture of subdued horror and resignation.
The scene before her is a mortuary. Three bodies lie on marble plinths in a low-ceilinged room where the windows have been shortened with plaster board, making it feel subterranean. She approaches the dead, with her form bathed in shadow, and stops before the corpse of a young man. He lies white and maimed, visibly wounded on the forehead and chest. She leans on the plinth as if the sight of the corpse weakens her, before taking it in her arms and delivering her speech. 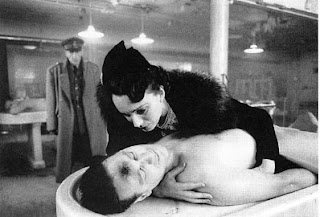 This is Anne Neville. Or at least it is the actress Kristin Scott Thomas, playing the role of Anne, in Ian McKellen’s 1995 film version of Shakespeare’s Richard III.  But it is not Shakespeare as the playwright would have recognised it. The settings and costumes date the action to the first half of the twentieth century; it is martial, modernist, Art Deco. This Anne is more stilettoes and sunglasses than kirtle and chemise. The mortuary scene was shot in a lower storage room of the empty Pearl Assurance Building, a vast greying edifice constructed between 1912 and 1919 in Holborn, London. It was not a ploy to keep down production costs: the grimy, dimly-lit basement was perfect for the film’s new setting. Written by McKellen and Richard Loncraine, the screenplay updated the story to a fictionalised England of the 1930s, “a decade of tyranny throughout Europe…when a dictatorship like Richard III’s might have overtaken the UK.”[1] It was a fantasy, a parallel world exploring one of history’s “what-if” scenarios; a vision of the Home Counties being administered by the Nazis or Mosely’s Union of Fascists. Thus, a late medieval King was juxtaposed with the rise of the Third Reich in London, echoed in the uniforms, music and set design. Richard III’s story was co-opted as part of a wider history, beyond anything the King himself could have imagined. Recalling the process of writing, McKellen explained “we talked about it in the near-present tense and imagined it taking place yesterday rather than yesteryear. This, I suppose, was what Shakespeare intended.”[2]
McKellen was right. As the Bard was writing, in 1591, the events he described were part of recent history, but as an entertainment, legend and a degree of dramatic licence were central to his work’s success. In 1955, Laurence Olivier’s and Claire Bloom’s memorable version of the scene followed more traditional lines and forty years later, McKellen reinvented its setting to draw modern parallels. In this way, Shakespeare’s play is subject to constant revision; each generation adds a new chapter to the afterlife of the text, for better or worse. Similarly, these changes continue the on-going narrative of Anne Neville, daughter of the Earl of Warwick, the legendary Kingmaker. Her life has undergone several phases of reinvention by later generations for the purposes of entertainment and propaganda, which is the very reason her brief existence is remembered. For the historian, Anne herself is not too dissimilar from a “text,” a set of clues to be decoded according to the standards of her day, which may have been mishandled and misrepresented through time. The process began early. Just as Olivier and McKellen adapted Shakespeare, so the Bard distorted actual events of the fifteenth century to better serve his dramatic intentions.
The real Anne was not the sophisticated beauty Kristin Scott Thomas suggests; by modern standards she was a child when the key events outlined in this scene actually took place. In the year that she was widowed, 1471, Anne was only fourteen years old. That year she also lost her father and father-in-law, in violent circumstances, whilst she was alone among her former enemies. She would have had reason enough to grieve. McKellen altered Shakespeare again to portray her cradling the dead body of her husband, rather than that of the murdered Henry VI, and Scott Thomas leaves the audience in no doubt about the extent of her emotions. Yet the grief that the role demands is misleading: Anne had been married for about five months, but the union had been arranged for political reasons and was possibly consummated only briefly. After a long association with the Yorkists, Warwick had performed a dramatic u-turn and allied his younger child with their Lancastrian foes. Anne barely knew her boy-husband and no evidence survives to suggest she held him in any affection. The loss of her father was far more significant. It meant that Anne was left alone in the paradoxical position of the teenaged widow, midway through the civil wars that were commensurate with her life span.
Clearly Shakespeare’s “history” was a fiction, re-animating well-known figures from the past and putting words into their mouths, within an abridged timescale. Previous chroniclers, story-tellers and historians like Rous, More, Holinshed, Hall and Vergil had done no less. However, Shakespeare’s dramatization of the incident has become so famous that it has almost entirely eclipsed historical fact in the popular imagination: the powerful scene develops along familiar lines as Anne’s grief is interrupted by Richard, Duke of Gloucester, the alleged killer of her relatives. According to the play of 1591, Anne recoils in horror from the blood-stained apparition, which displays the often-repeated physical deformities that were correlative in the Tudor mind with immorality and evil intentions. McKellen follows this interpretation. Playing the part of the King himself, his hunch-backed figure, dressed in military uniform, appears from behind the widow as Anne bends over her husband’s corpse. Sensing his approach, she turns in revulsion to see the “fiend” and curses him, yet Richard is able to manipulate her emotions to the extent that she agrees to become his wife before the exchange ends. Even as the villain, the character’s Machiavellian powers of persuasion cannot fail to impress.


In reality though, Richard was an old friend, perhaps more. His father, the Duke of York, had married Anne’s great-aunt and the young Gloucester had spent several years living as Warwick’s protégée at the family home of Middleham Castle. The Earl may even have been the boy’s godfather. The children would have been brought together regularly, in ceremonial and informal situations, so it not impossible that an early friendship had blossomed between them, surviving Anne’s arranged marriage with the enemy. After all, her family’s sympathies lay first with the Yorkists, then with her Lancastrian husband: next she would marry the boy she had known, whose family had made her a widow. Shakespeare truncates this: Richard forces Anne to accept his ring alongside her husband’s corpse, despite her curses. The actual ceremony took place over a year later in July 1472 and the pair lived together, apparently in harmony for over a decade. It may even have been a love match. The eighteenth century Ricardian Horace Walpole mentioned that Catherine, Countess of Desmond described him as “the handsomest man in the room.” There is no denying though, that the alliance was financially expedient to both, so much so, that they were prepared to enter a marriage that was possibly invalid in the eyes of the medieval church. Together, they were crowned in 1483: Anne was Richard’s companion, his wife, the mother of his child and his queen. Did he then go on to murder her, as Shakespeare suggests ?
McKellen shows a rapidly deteriorating Anne. The haggard appearance of the wife contrasts sharply with the earlier elegance of the widow. In the back of a limousine she hitches up her skirt and, according to McKellen’s screenplay, “finds the appropriate spot in her much-punctured thigh.” Her unnamed drug of choice is described in the screen play as “calming” and she closes her eyes and “waits for it to work,” while the orchestra plays triumphantly. Later she appears “doleful” and sad, later still, in a drugged stupor, in a world of her own and finally, catatonic. [3] The last the audience see of her is a motionless form, lying in bed with wide, staring eyes. A spider descends and lands on her face, scurrying away as she remains unblinking. McKellen’s Anne Neville is dead. Obviously, the fifteenth century Queen’s death was not attributable to recreational drugs but the rumours of her demise were just as sinister. Popular culture has upheld Anne as another of Richard’s victims, with Shakespeare placing her among the accusatory ghosts that disturb his sleep before battle. This is unsurprising as the circumstances of her death are shrouded in mystery and, for once, the corrective facts are harder to establish. In early 1485, the corridors of Westminster Palace whispered of jealousy, flirtations, affairs and illness, as some contemporaries suggested Richard might have been planning his second marriage while Anne was still alive, perhaps to a foreign princess, perhaps to his own niece.

Aged only twenty-eight, the Queen passed away amid an eclipse of the sun and the chroniclers were swift to draw their conclusions. Did Richard really play a part in her death; did he “eschew her bed” as she was fatally ill, possibly contagious? Was she poisoned to make way for a younger, more fecund model? Perhaps she was lovingly tended, yet unwittingly administered with medicines that could themselves prove fatal. The truth of Anne’s demise remained unresolved at the time and the dramatic regime change that followed compromised the objectivity of many witnesses and chroniclers. It is time to tease out the facts from the fiction.

Here's the scene from McKellen's film:

http://www.youtube.com/watch?v=3wxGfjcfZkA&list=PLN1dkbJ9dexduepI1w7wK5FfQjdCPgPqu
Posted by Amy Licence at 07:40