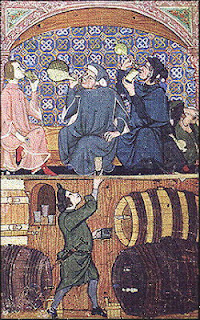 Relations between men and women in the late fifteenth century were shaped by contemporary stereotypes about the sexes. This stretched into all areas, from daily life, intellect, medical and legal proceedings, to expectations of gendered behaviour. While men were perceived as noble, powerful and strong (by themselves), women were their counterparts and opposites. Although they were essential for the running of a home and the creation of children, women were seen as temptresses, seeking to seduce men, weak-willed, gossiping and inconstant. Hundreds of lyrics, ballads, broadsheets, songs and contemporary jokes survive about women that demonstrate just how deep this misogyny ran. However, no concept of feminism or equality existed. Women wouldn't have considered themselves to be down-trodden or slandered. Many appeared to have accepted this definition of their sex and some went as far as to deliberately perpetuate it or to exploit it for their own use. Refreshingly, a number of strong females emerge through the stereotype, to prove that many women of the era were strong, powerful, intelligent, witty and successful. Who would have thought it ?

One surviving anonymous poem from the late fifteenth century plays on many of these issues. Its positive representation of women almost suggests a female authorship, although this is unlikely. Elightened men could and did, write sympathetically and generously about their "enemies"; Chaucer's portraits are full of affection and glee as cunning women triumph over men, yet they also re-enforce the masculine fears of the smart woman, that persist even into the modern era. (Think of Sherlock Holmes' horror at being outwitted by Irene Adler!) The poem "Wives at the Tavern" re-creates the fears men entertained at the time, of the gossip that women exchanged when they met unsupervised. Women would have met regularly at domestic locations, such as market places, rivers and ditches. shops, churches, streets, fields and fair grounds, as they went about their daily business. This group of women usurp the masculine preserve of the tavern, in order to drink together. This was strictly warned against, as unfeminine behaviour by other manuals and poems like the other late fifteenth century poem "How the Goodwife taught her Daughter." 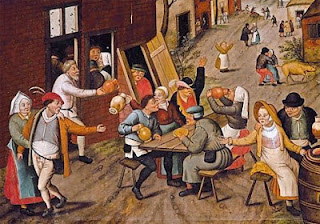 The term "gossip" in itself, was and still is, emotive. It derived from "good sister" or God sib, companion or godparent, referring to women who supported each other in the exclusively female preserve of the birth chamber. The women of the poem come together as friends, calling each other "gossip", emphasising their female solidarity. The anonymous narrator promises us "full good sport" by relating how women meet "in a lane or street" to "comfort their sick bodies." However, he dares only tell "half the substance" for fear of their "displeasure." One woman tells another that she knows the best place to find a draught of "merry-go-down" (a drink or a euphemism?) but would give her "gown" that her husband did not know about it. The women are summoned by name... Elinor, Joan and Margery; Margaret, Alice and Cecily and all come bringing food to share. This meeting is about nourishing the body and soul! They go on ahead, two by two, "wisely that ye be not seen," to know where their husbands are. One woman says she could expect " a stripe or two" if he should see her, although Alice replies that she fears no man!

In the tavern, they begin to drink, with little thought for the debts they might incur, "for we will spend, till God more send." Their talk revolves mainly around the appreciation of their food; food which they have brought from home, otherwise intended to feed their husbands: flesh, fish, wine and junkets. The drink does them good: "sweet wines keep my body in heal (health)," implying that they need to be fortified before returning to their homes and duties. One woman, who looks miserable confesses that her husband "beateth (her) like the devil of hell," becoming more violent as she begs for mercy. Alice curses him, saying that any man who beats a woman, especially his wife: "God give him short life!" Meek Margaret then adds that any man who beats he, receives five blows in return, even though she is a weak woman. She is not afraid but gives as good as she gets "though I have no beard!"

The women then reckon up how much they owe for what they have drunk. Their individual contributions of 3 pence is considered cheap for "such a sort and all but sport." While some fear discovery, Anne says they only came for a good drink and should go home and with a cheeky wink. The narrator tells us they will meet again, once a week to make merry. A few will return to the tavern every day "or else they will groan and make them sick." He concludes by asking the female audience, "is it not so ?" and requests that they raise their drinks to him. The poem concludes on a positive note, a jolly sense of women enjoying themselves and experiencing a small outlet from the routines of their lives, although the fears and experiences some express, like the beaten wife, indicate a darker truth. At the end, the narrator refers to the drinking women as "good fellows," givng them a masculine identity in line with their masculine behaviour, suggesting the fenale desire to equal or usurp a male position without their knowledge. It is never stated what happens when the women get home or whether the husbands learn of their outing. The jolly tone belies a more sinister reality about gender relations in the late fifteenth century, however the poem has a timeless feel.

The poem "Wives at the Tavern", from an anonymous fifteenth century manuscript was published in the Victorian T.Wright's "Songs and Carols."
Posted by Amy Licence at 05:02