Don't Get Your Medieval Knickers in a Twist! 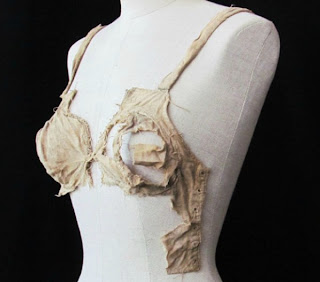 What did medieval and Tudor men and women wear under their clothes ? For a large percentage of the population, clothes were laboriously handmade and passed down in wills and bequests. Few people outside the aristocracy had extensive wardrobes, which suggests early forms of underwear were also fairly homely and plain. Given the strength of the English wool market in the fourteenth century, spinning and knitting were very common; such garments could be easily made and repaired at home. Much depends upon climate too; while wool would be suitable for cold, wet winters, lighter fabrics such as linen would be more suitable for warmer times and affordable for the wealthy. Even for royalty, though, keeping themselves clothed could be pricy: Elizabeth of York paid 6d for a pair of socks in 1502, when a labourer might earn a daily wage of 4d. However, while the twenty-first century bra with all its technology and varieties seems strikingly modern, may be considerably older than we think.


Excavations in an Austrian castle in 2008 turned up a vault filled with medieval textiles, including what appear to be some early examples of underwear. Many were made from linen but some also had outer layers of colourful wool. The bras comprised shaped cups and straps, with decorated borders of a form of lace and a possible back strap. Another had a longer body section, giving it the appearance of a modern corset with eye-holes to be laced together with ribbons. Radio-carbon dating has confirmed these items came from the fifteenth century. Larger breasts may have been bound, as Shakespeare has his cross-dressing heroines do, although this was likely to have been more practical when manual labour was being undertaken. With many working women of childbearing years breastfeeding though, this would have been impractical and suggests the existence of long-perished garments in the model of those discovered at Lengburg Castle. 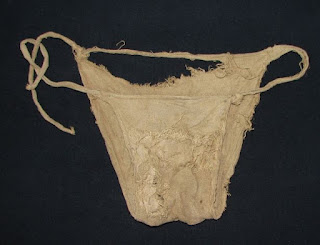 Knickers were quite a different matter though. In the late medieval and Tudor periods, they were more likely to have been worn by men! A pair found recently in Austria resemble a modern white bikini bottom, with ties at the hip. These old pants were considered to be signs of dominance and power; men required them for support and protection, emphasising their superiority over women, who wore layers of skirts but no other underwear. This must have made life difficult during menstruation, which was absorbed by the traditional rags. Some sort of early girdle or belt must have been required to hold these in place!


The thirteenth century Maciejowski Bible depict both men and women in hose and the exclusively male braies or breeches. These come close to a baggy sort of long knickers, loose about the bottom and rolled over at the waist, while hose were three-quarter length stockings which were tied up to a waist band. Manuscript illustrations show workers stripped down to this bottom layer when labouring. Women’s hose and socks are far less visible in these images, with usually just the foot showing, although these are often striped. They could be tied in the same way as the men’s, creating a complicated system of knots under the outer layers of clothing, although many were shorter and held in place by garters. The quintessential codpiece, from “cod” or scrotum was originally a soft flap or pouch, again tied in place, which may have been an integral part of the braies or else a separate attachment. With this as the only covering, male genitals were left vulnerable and exposed as hem lines rose; correspondingly, the cod piece became more substantial. By the time of Henry VIII’s famous groin-centric portrait of 1537, it was a symbol of potency and virility. They were shaped and padded for emphasis, with some even made of metal but died out towards the end of the sixteenth century. 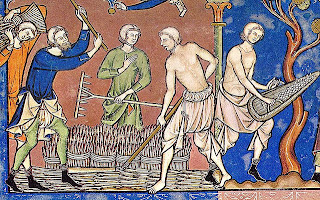 So little early underwear survives that any comprehensive theory on its use and existence must be ruled out. For women, with their long dresses, the situation is even less certain, although practicality, budget and climate must have dictated whatever solutions they found for everyday wear. No doubt what appears elusive and fascinating now was commonplace then; is it too hard to imagine scholars in the twenty-fifth century getting excited over the lingerie of the present? At least there will be plenty of documentation. 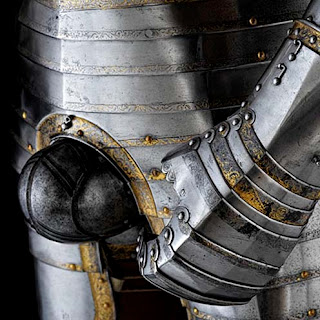