This is the provisional cover for my next book, "Elizabeth of York, the Forgotten Tudor Queen," which tells the true story of the white princess. 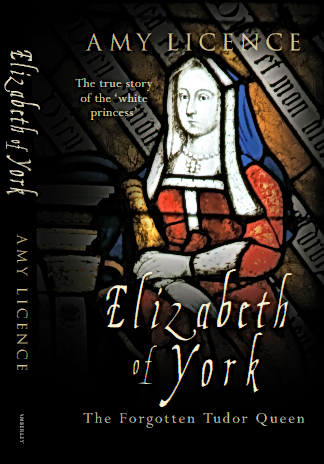 As Tudors go, Elizabeth of York is relatively unknown. Yet she was the mother of the dynasty, with her children becoming King of England (Henry VIII), Queens of Scotland (Margaret) and France (Mary Rose) and her direct descendants included three Tudor monarchs, two executed queens and ultimately, the Stuart royal family. Although her offspring took England into the early modern world, Elizabeth's upbringing was rooted firmly in the medieval world, with its courtly and religious rituals and expectations of women. The pivotal moment was 1485. Before that, her future was uncertain amid the turbulent Wars of the Roses, as she was considered as the bride of first one man then another and witnessed the humiliation and murder of her family. Surviving the blood bath of her uncle's reign, she slipped easily into the role of devoted wife, mother and Queen to Henry VII, venerated ever since for her docility and beauty. Yet was she as placid as history has suggested? In fact, she may have been a deeply cultured and intelligent survivor who learned to walk a difficult path through the twists and turns of fortune. Perhaps she was more of a modern woman than historians have given her credit for.