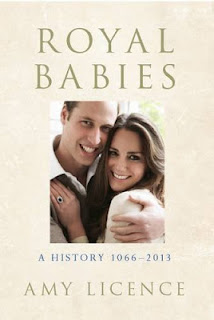 NB. This will not be the final cover- that will feature an image of the new royal baby.

In it, I've chosen 25 births from the last millennium which are interesting in some way; these babies may have changed the succession, arrived in unusual circumstances, or not been the gender their parents hoped for. Others were eldest sons who did not make it to the throne or some who were not destined to rule but ended up as Kings or Queens. Quite literally, some were born great, some achieved greatness and some had greatness thrust upon them! The book will also include information about the changing practices surrounding pregnancy, childbirth and infant care. One narrative thread deals with the history of midwifes/accouchers, exploring the times when it was more fashionable to have a man or woman assisting at the birth and the effects of this. It's a subject that is already proving of interest to readers, so I thought I'd put up the links to two other pieces I've done on it, to give you a taster.

More to come on this topic....