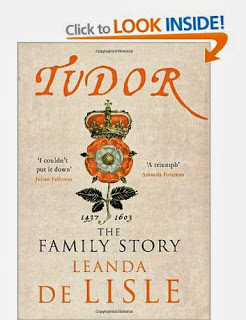 “Tudor: The Family Story.”
Leanda de Lisle
Chatto and Windus
29 August 2013
978 0701185886
Having read de Lisle’s “The Sisters Who Would be Queen,” I was keen to read her version of the Tudor story and I wasn’t disappointed. This new book is a must for all enthusiasts of the era, a sweeping family saga that takes us from the arrival of Owen Tudor at court in the 1420s, all the way through to the end of the dynasty. It is, as it says, the account of a family’s fortunes, detailing their fluctuating position over two centuries. There is a lot of material to cover here but de Lisle does not allow the reader to lose focus. She sweeps us through with crisp prose, whilst finding opportunities for the memorable anecdotes and colourful details that such a wide-ranging work requires to prevent it spreading too thinly. De Lisle’s style is very accessible and balances clear explanation with a commentary aimed at that those already familiar with the era, so would appeal to those already well-read in the area as well as those coming to the subject afresh. It is popular and scholarly at the same time.


I particularly enjoyed the section on Owen Tudor’s history, as this was an area I knew less about and is not usually included in studies of the Tudors as a ruling dynasty; they are sometimes presented as springing into existence in 1485 and it is interesting to see the role they played during the wars of the roses. In fact, I would have been happy if De Lisle had pushed her research back even further and given us more detail about their Welsh origins. I was also interested to learn more about the illegitimate son Owen fathered later in life, David Tudor, and his support of Henry VII. It is also refreshing to see the story of the family told with a positive emphasis on the role played by Margaret Beaufort, who has all too often been a recent casualty of fictional and non-fictional portrayals, reduced to a caricature of the pious and meddling woman. Here, she is very much a driving force, sympathetically drawn as a mother influencing her only son.


The book also explores the way the family tree branches out, including information on the less well studied members of the Tudor clan and where they fit into the story. De Lisle has made it something of a speciality of hers to illuminate the lives of those family members on whom the spotlight of history did not fall, reminding the reader that birth, inheritance and gender are matters of accident and that being part of this illustrious family was not just difficult for those whom it propelled on to the throne. The portrayal of Mary I can also sometimes descend into oversimplification but this book gives the context in which her character was shaped and the process by which she became the woman and queen known to us as “Bloody Mary.” The final chapters on Elizabeth were also vivid and memorable, concluding the work with her deathbed scene.