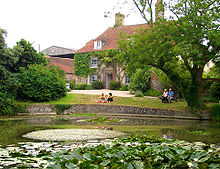 Hidden away at the foot of the Sussex downs, Charleston farmhouse remains an enduring design icon. Surrounded by rambling, quintessentially English gardens, it lies set back from a track off the busy A27 between Brighton and Eastbourne, a haven of a bygone era. Thirty years after the death of its last long-term resident, artist Duncan Grant, the house’s popularity is still as strong with the visiting public as ever, as attested by the annual festivals, courses and thriving gift and tea shops but it is Charleston’s unique blend of shabby gentility and spontaneous charm that has ensured the affection in which it is held.

That style was largely the work of Vanessa Bell, who first leased the farmhouse during the First World War, in order to find work for Duncan Grant and his lover David (Bunny) Garnett. With her two boisterous sons in tow, Vanessa had initial reservations about the scale of the project, for although it had previously operated as a guest house (metal numbers are still screwed to the doors of the bedrooms,) there was no electricity or telephone. Water had to be pumped from an outside tap and only after the wood had been chopped, could the stoves be lit. Vanessa’s sister Virginia Woolf wrote to reassure her that “if you lived there, you could make it absolutely divine,” so from 1916, the living sketchbook of Charleston began. 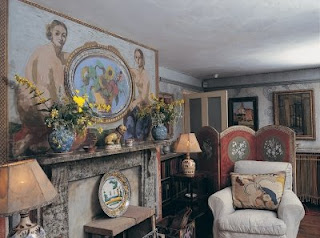 There was no grand style scheme, nor much of a sense of finish or polish. Initial decorations were made on a spontaneous, ad-hoc basis, designed to make the place more inhabitable and it is this vibrant, raw feel that makes the house feel like a home. On occasion, décor was determined by family life, when the boys’ rowdy games broke a mirror in what is now the garden room, Grant left the ornate frame on the wall and painted a frieze within it; similarly when Clive Bell’s study was the schoolroom, a foot through a door panel necessitated a new work of art. Vanessa, her husband Clive and Duncan, later her lover, were profoundly influenced by Parisian avant-garde art of the early Twentieth Century, paying frequent visits to the studios, galleries and collecting works by Cezanne, Derain and Matisse. Before the move to Charleston, Vanessa’s love affair with critic Roger Fry drew them into close involvement with his controversial Post-Impressionist exhibitions and establishment of the Omega workshops. These influences are felt all through the house.

The predominant palette is a Post-Impressionist blend of what could easily have become jarring colours; muted greys, pinks, red, and moss green, punctuated with intense yellow, orange and black, of which Grant’s “Lily Pond” table is typical. Vanessa daubed the walls with a free hand, favouring feminine curves and circular patterns, flowers and fruit, alongside Grant’s acrobats, nudes and caryatids. Nor was the paint confined to walls. Vibrant decoration was applied to any surface, in keeping with the Omega gallery practice; wood boxes, screens, tables, beds, chairs; even the bath panels are painted with folksy-style still lifes or natural forms. The artists designed fabrics which replaced old upholstery, or were worked in needlepoint by Grant’s mother; the later addition of Quentin Bell’s (son of Vanessa and Clive) pottery produced a range of ceramic tableware as well as the distinctive lampshades and pots in most rooms. 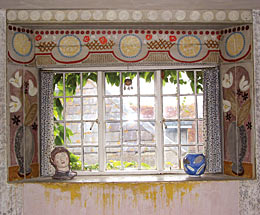 But there are surprises at Charleston. A number of items from Vanessa’s childhood home in Hyde Park Gate are mixed among the hand crafted, home-spun items. Alongside the delightful circles and flowers painted around the window of the spare bedroom, stands the dressing table which belonged to her mother, now a little foxed and on the mantelpiece beside a small clay figurine shaped by hand, is part of the old family Staffordshire collection. It is this very eclectic contrast, between high Victoriana and informal personal expression, which makes Charleston farmhouse unusual. It does not feel like a museum; instead the sense of vibrancy and exuberance remains a lasting testimony to the lives that were lived in it. In 1919, Virginia Woolf wrote in tribute: “Vanessa presides over the most astonishing ménage; Belgian hares, governesses, children, gardeners, hens, ducks, painting all the time, till every inch of the house is a different colour.”

Vanessa Bell remained at Charleston, making it a warm centre for friends and family, as photographs of the era attest. She died in 1961, Clive in 1964 and following Duncan’s death, the process of regeneration began, led by Deborah Gage and Angelica Bell (daughter of Vanessa and Duncan.) Today, visitors still make the pilgrimage down the rambling lane and attend the many events held at the house: a large number of publications have made its charm accessible to a wider audience, with a lasting influence on late Twentieth century Bohemian-style interiors.


Visit:
Charleston Farmhouse is open to the public from April-October.
Wednesday- Sunday and bank holiday Monday 2-6pm. Last entry 5.30pm.
01323 811265.
The Charleston festival is held annually at the end of May; the Short Wonder Story Writing Course runs in September.
Look out for the brown sign one mile East of Firle, along the A27 between Eastbourne and Brighton.
Posted by Amy Licence at 14:53