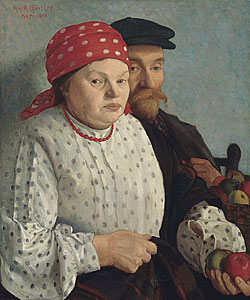 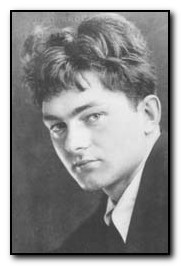 The young artist
Artist Mark Gertler’s early work was inextricably linked with his childhood in ’s . Born in the shadow of Spitalfields market in 1891, he was inspired by the bright colours of Jewish folk art and the densely populated streets around Whitechapel, to produce some of the most iconic early Twentieth century images of Jewish immigrants. Works such as “Talmudic Discussion” (Jews Arguing) (1911), “The Rabbi and his Grandchild” (1913) and “Rabbi and Rabbitzin” (1914), helped establish Gertler’s career and presented the first such images to a hegemonic English art establishment. But what was this world like, that so inspired and rewarded his devotion ?
For many, it was a paradox of safety and persecution. Whitechapel had been a haven for refugees for centuries, first developed under Elizabeth I as a home for persecuted Huguenots who established the silk weaving industry that gave the district its early distinctive character. After the Industrial revolution, Jews from Russia and Poland sought safety from persecution there, although the vehemence of hostility they encountered is apparent in their scape-goating during the investigation of the Ripper case in 1888, when any perceived aliens became the target of suspicion, ranging from Jewish Immigrants to a Greek circus troupe and passing gypsies. A local newspaper reported how “...it was frequently asserted that no Englishman could have perpetrated such a horrible crime and forthwith  the crowds began to threaten and abuse such of the unfortunate Hebrews as they found in the street.”
The late 1880s were a real crisis time for Jews in the , with unemployment and housing shortages provoking a national and political debate. The “Pall Mall Gazette”, which was later to praise Gertler’s works, warned its readers in February 1886, that Jews were “...becoming a pest and a menace to the poor native born East Ender” and the following year, in a speech given in the House of Commons, a Captain Colomb, Conservative MP for Bromley and Bow, asked what other countries “...permit the immigration of destitute aliens without restriction.” A Commons Committee was established to interview a “random” selection of these “aliens”, with the effect that as many as possible were to be encouraged to return to their homelands. Liaisons with produced a despatch from ordering all refugees to return home, with the Jewish Board of Guardians supplying funds to make this possible. In their annual report, the Board confirmed they were doing all they could to dissuade new arrivals, attempting to reconcile “its duty to the needy alien with the part it has to play as a body of patriotic Englishmen.” Local MP Samuel Montagu, in his own words “joined with others in subscribing towards sending poor foreigners back to their country.” Anti-Semitic feeling was high; letters of complaint to local newspapers ascribed all social, moral and physical evils to the immigrant communities; at public meetings, voices spoke out against “unfair labour practices” and court cases revealed prejudice and unnecessary harshness: even random, physical attacks upon Jews were increasing.
Mark Gertler’s family were among the thousands returned to with the aid of the Jewish Board of Guardians. Although Mark had been born in Gun Street, in 1891, his parents originated from Przemsyl, on the border of , and . It is impossible to know how much their decision to return there in 1892 was taken willingly but the crippling poverty they experienced upon their return, sent them back to permanently in 1898. By then, the situation had diffused a little; tensions were not as strong as they had been a decade before and the community was supported by more sympathetic and influential voices and figures. The “East End News” criticised the “...unjust reflections upon Jewish tailors” who had ensured the clothing industry remained British and the “Jewish Chronicle” stated that immigrants were not a burden at all, but instead had been “a source of profit rather than loss to the native worker.”

Mark Gertler’s childhood in the marked an improvement upon Przemsyl privations, but still involved frequent upheaval and the ever present threat of total poverty. The family moved many times, often only a few streets away from the old house and they were never more than a mile from Liverpool Street station, as was the case with many refugees. This sense of a community inspiring each other despite shared suffering; the old men in the Synagogue, the women at the market, children playing in workshops and yards; was the start of the life long affection Gertler was to feel for the East End and “his people” all his life. Even when experiencing acute financial hardship, it was where he belonged; “I must go back to my East End, where only God knows how many discomforts I suffer...I've also learned that I must go on in the . There lies my work, sordid as it is.”

It was the vital colour of his home and the characters he met there, that ignited in Mark Gertler the energetic zeal for life and beauty that emerges in his work and letters. It also fostered in him a love of the people of his home, solid and realistic, beautiful and colourful, yet tainted by hardship: the very qualities he tried to capture in his later portraits of them. As a boy he loved to wander and roam about the streets, observing the colour, movement and life going on around him. Shop fronts particularly attracted him and he spent hours looking at the quality and texture of fabrics and their appearance in different lights, transmitted into the rich vividness of his early still lifes. Others too, were able to see the inherent beauty of the East End; the chronicler Israel Zangwill recorded; “this London Ghetto of ours is a region where, amid uncleanliness and squalor, the rose of romance blows yet a little longer in the raw air of English reality; a world which hides behind its stony and unlovely surface an inner world of dreams, fantastic and poetic...”  In her novel “In Darkest London,” Margaret Harkness described a walk through the Jewish quarter, in the eyes of an outsider, starting with a “buxom Jewish matron” sitting on a doorstep, who could well have been Mark’s mother Golda, who loved to sit out the front of her house watching people pass by. Harkness continues: “...little dark children who tumbled at their feet. Young Hebrews smoked short pipes and talked in their own lingo....a young girl with jet black hair and flashing eyes...singing a foreign song.” In their “long suffering faces,” she read not despair, but hope and compared them to the “down trodden...crouching and whining” men who were their detractors, praising them for their assertion of "sturdy independence."
The Gertler family’s first home was at number two, Zion Square, where seven of them shared a single room, considering themselves lucky in comparison with others. The square itself was south of Whitechapel Highstreet; a dozen or so three storied eighteenth century tenements with doors opening directly onto the ground and a small paved yard at the back, an area which has now been developed to accommodate the overspill of the City. Only a short walk south were the docks, a further possible source of employment for those in the area, although the district was home mainly to artisans and labourers, including many tailors whose whirring machines created a constant backdrop of sound, late into the night. The family’s immediate neighbours were a chandler and a diamond mounter, others were cigar makers, fur and skin workers or general hawkers and traders. The Jewish Board of Guardians, who monitored the state of local labour, produced a list of key occupations for the years 1882 to 1892, according to which, tailoring and the boot and shoe trade were most popular, followed by the uncertain profession of hawker, or general tradesman. Contemporary comment shows the complaints by which workers in these most popular professions could be identified; the shoemaker with his stained hands and the tailor with his stoop. Mark’s father Louis found work that fitted in well with this; he was paid 12s 6d a week to smooth walking sticks with sand paper.

Their landlord was a bootmaker, whom Gertler recalled with affection; “Mr Levy and his wife were kind, decent people” who were not insistent that the rent was paid on the same day every week. Their leniency and understanding was appreciated by the family, who found them willing to help smooth their passage into the community, sometimes acting as translators, as Golda still spoke only Yiddish. Their son Moisha soon became Mark's friend and spent much of their time playing in and around the workshop where boots were made and repaired, a “dirty, airless little room.” Despite the terrible conditions, a sense of solidarity and mutual support illustrates the drive and determination that bound and strengthened the community.

The Gertler family eventually settled in Spital Square and established a thriving fur business that supported both Mark’s elder brothers. Mark himself was to remain in the until the end of 1914, after which he felt it necessary for his artistic development to move to the more well-connected Hampstead. Linked with the Bloomsbury group through his Slade friendships and passing the war years in the shelter of Ottoline Morrell's Oxfordshire home he would produce his decisive work, "The Merry Go Round," a nightmarish vision of wartime carvnial, in 1916. However, the East End and its people remained a powerful muse throughout his life as “my London, where I have experienced so much…that has become a part of me to such an extent that I can almost imagine life more easily without the people I have known than its own embodiment and peculiarity.” He never forgot those early years of paradoxical joy and suffering, which had provided him with the determination and subject matter that inspired the success still recognised over seventy years after his death.
This article originally appeared in The London Magazine in September 2008
Posted by Amy Licence at 09:30