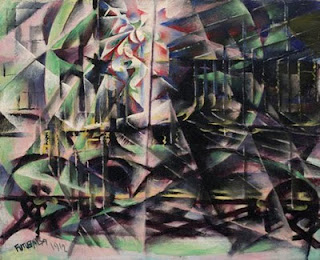 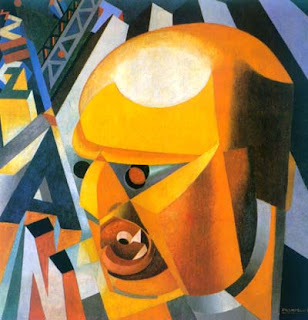 Prampolini's portrait of Filippo Marinetti, 1924-5
In the years immediately preceding the Great War, the vanguard of European art strove to depict the new century’s potential in startling new images. In March 1912, 40,000 people attended an exhibition of the Italian Futurists in London’s Sackville Gallery, encouraged by the inflammatory reviews of a national press who understood its readers’ traditional, bucolic tastes. Broadly, the Futurist intention was to liberate art from tradition, including the destruction of libraries and museums as institutions guilty of ossifying taste and preventing the advancement of the modern: it favoured war, machines, movement and masculine energy. English mathematician and philosopher Bertrand Russell conceded that “the modern world calls for such a philosophy,” in which, according to the Bergson theory, the dynamic sensation was itself made eternal, establishing the Futurist preoccupation with the innovations in transport that typified their decade. However, as when presented with most artistic innovations, the great British public were less than enthusiastic.

To the Pall Mall Gazette, the experience was a “nightmare;” the Daily Express concurred in the view that Futurism was “the new terror,” filing its response under the heading “Picture Gallery of a Madhouse: Crazy Dreams put on Canvas.” The Morning Post refused to allow its critics even to review it, as “an immorality (which) must not be chronicled,” while the Manchester Evening News saw a connection between the “anarchic” paintings and a recent attempt at royal assassination in Rome. The Times reacted to perceived ugliness in the works: “the more intelligible the pictures, the more commonplace they appear…a perfectly commonplace picture of a very ugly woman” and Frank Rutter in the Sunday supplement wrote that “all London is talking of the Italian artists at the Sackville Gallery” even though “all their little novelties have already been paraded in Paris by men as able and abler than themselves.” Sir Philip Burne Jones, child of Pre-Raphaelitism, was “outraged by these ludicrous productions …outside the place of art altogether." Despite the hostile reaction, Futurist leader Marinetti felt he had found the ideal location for the new movement, claiming in interviews that “London is a futurist city…(with) a totally new idea of motion, of speed.” Some English artists agreed.
However, in others, this savage machine-age art elicited a very different response. The pre-war work of Slade students Paul Nash, Dora Carrington and their circle, drew inspiration from the English landscape, work and rural life, as the setting for biblical or mythological narratives. Seeing the mysteries of ancient Britain in the modern landscape, they “Cezannified” an existing tradition in order to forge a real national alternative to European Post-Impressionism; not avant-garde but modern, vibrant and capturing the Edwardian zeitgeist. The contemporary nostalgia and tendency to define “connection between land, countryside and nation as somehow innately English” had been fed by the establishment of the National Trust in 1895 and launch of the magazine “Country Life” two years later. With the increasing urbanisation of the population and spread of suburban living, a wide range of books were published on rural activities, aimed at “the villa residents and the more numerous others living in London.” Camden artist Spencer Gore’s beautiful images of Letchworth celebrated the town’s establishment as the first Garden City. The Slade students were following the tradition of the Arts and Crafts Movement and the proliferation after 1905, of fashionable, pastoralist “back to nature” movements. 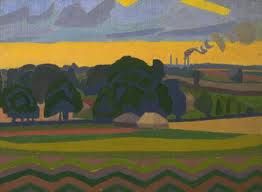 Letchworth, Spencer Gore, 1912
The works of Nash and Carrington went beyond simply capturing the popular mood, though. Their primitive, expressionistic elements ensured them a place in the Post-Impressionist canon and provoked strong responses among friends and rivals alike. Nash’s stunning 1912 “The Pyramids in the Sea,” employs a dark, intense palette that retains the sombriety of Sickertian tones but substitutes a grey-blueness, capturing a sense of sinister, nocturnal drama. The simple but startling presence of surreal forms rising from the waves is resonant of a Blakean nightmare, sublime in beauty and terror, foreshadowing Nash’s post-war symbolic and emotional landscapes. A similar palette and style marks the early works of his associates: curved, womanly, idyllic landscapes in light airy blue, russet, yellow and green. In order to capture Elgar’s “Land of Hope and Glory” they looked to classical English landscape, eighteenth century poetry, romantic artists and the Pre-Raphaelites as well as other influences closer to home. The landscapes produced by Paul and John Nash, Dora Carrington, Stanley Spencer and their friends Gwen Darwin and Christine Kuhlenthal between 1912 and 1914 epitomised the traditional English love of the land, whilst introducing a new national palette, abstraction of patterns and an almost surreal interpretation of the artist’s emotional connection with the land. 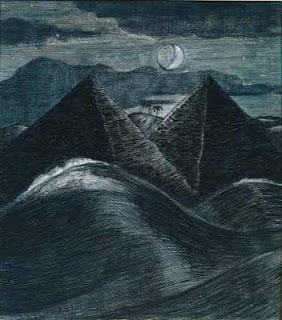 Paul Nash's Pyramids in the Sea, 1912
Carrington’s 1912 fresco panel “Picking vegetables” captured an idyllic symbolism and rhythm of rural life, with a mass of fluid Cezannish trees placed behind an almost Van Gogh-yellow curve of fields and pointillist trees. Two men are engaged in hoeing, bent at the waist, their motion echoed by the boy picking a cabbage, monolithic in quality and representing the harmony between mankind and the fertile landscape. Carrington contrasts the cultivated and the wild: abundant crops sit beside wild flowers, open fields contrast with dense woodland. Varieties of land use are portrayed in a pleasing, non-threatening vision of unity, while the waiting mother holds an empty basket, ready to take the produce to the kitchen or market stall. Similar fresco panels, “Hay Making” and “Sheep Shearing,” on which Carrington collaborated with Constance Lane in 1913, present the beauty and harmony of men engaged in rural tasks, in a light, airy palette. Writing to John Nash during her stay with Constance’s mother outside Hemel Hempstead, her belief in the function of art as expressive of a deep seated, passionate appreciation for the countryside is evident:
“…it is a most wonderful country. You and Paul should just see the trees and
green fields like lettuces, you could eat them, they are so luscious. And black
sheep making patterns on the green fields…I (did)…some amazing landscapes
…the best was a long-shaped upright panel with a moon on a sky glazed with
many colours…green, blue-pink, dull mauve…what good shapes the trees make
in this light.” 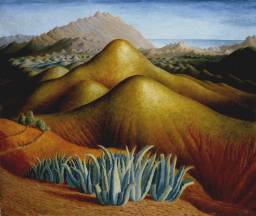 A later (1924) work by Carrington of Spanish hills.
However, there is very definitely the sense that Carrington’s enjoyment of the countryside was as an artist rather than a participant in rural life:
“…about six workmen are running about…Lane and I feel like great masters
controlling this band of men”
It is difficult to escape the “Marie Antoinette plays shepherdess” response to Carrington’s bucolic idylls, where art divides people along class lines into creators and workers, idealised through her portrayal. Her later, war-time landscapes of the hills around her home, would present a maturer vision, infused with emotional symbolism and hints of the surreal.
Symbolic landscape was the most preferable alternative for many young artists who rejected the more avant garde aspects of Post-Impressionism. Furthermore, its synonymity with Englishness made it more relevant and attractive, particularly among the Slade graduates. John Nash’s wife, Christine Kuhlenthal’s “The Picnic” of 1914 is heavy with nationalistic iconography. The neat lawn, enclosed by white picket fence protects and gives access onto a gentle rolling landscape of cultivated and uncultivated fields. Tall, white lilies soften the harsh line of the fence, exotic, elegant and protected within the garden. A distant lake lies silver and tranquil before misty blue-mauve hills and glimmers of gold in the west suggest the approach of sunset. Beneath the apple tree’s peeling bark, a man and woman face a second seated woman in bright golden dress, balancing an apple upon her head, suggestive of the William Tell legend, although there is no one to displace it. Apples are visible still growing on the tree and on the grass to the woman’s right, half red, half green, paradoxically symbolic of national identity and temptation. More subtle symbolism is at work here than in Nash or Spencer; the idyllically tranquil scene, with harmonious figures and colours, presents a protected environment that develops Arts and Crafts traditions. However, the picture contains the possibility of biting the apple, opening the gate and pursuing the path down towards the lake. This landscape is troubled by the subtle possibility of disharmony. 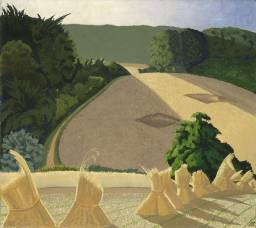 John Nash, The Cornfield, 1912
The new English landscapes aimed to capture the spirit of ancient Britain and explore man’s relationship with the countryside as a specific function of nationality. In the search for a modern British art, such images capture a new artistic spirit emerging beyond the Edwardian era, invigorated by personal response to recent French developments but retaining reverence for the past. Additionally, woodgraver Gwen Darwin, sculptor Eric Gill, landscape painter J.D.Innes and allegorical artist Stanley Spencer’s responses to their rural environment prove the spread and depth of this era’s veneration of a world that was about to vanish. Now, the pathos of these scenes lies in our hindsight of the approach of war that would transform the Nash brothers' landscapes and curtail the glorious Edwardian flourish of artistic experiment.
Posted by Amy Licence at 08:08