The Real Star of "The Third Man:" Harry Lime's Vienna. 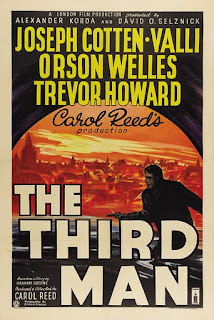 From the moment of its conception, the 1949 box office hit “The Third Man,” was always going to be far more than a simple masterpiece of film noir. With the impressive triumvirate of Alexander Korda, Carol Reed and Graham Greene collaborating on the screen play and direction, Selznick’s production, Karas’ music and the unforgettable performances of Orson Wells, Alida Valli and Joseph Cotten, set against the complex and entropic landscape of the bombed-shattered Vienna, the film’s powerful mis-en-scene becomes the vehicle for a tale of moral corruption, disillusionment and the stasis of an ancient and noble city awaiting its rebirth.
It was Korda’s idea to base a film in occupied Vienna, where Greene was sent to adapt an existing screen play early in 1948. He was shocked by the physical destruction and brutal segregation of the city into zones under four ruling powers but even more so by the determined emergence of life, robustly and persistently from among the ashes. Vienna had suffered a decade of terror and privation: occupied by the Germans in 1938 and relieved by the Red Army in April 1945, the remaining population had endured four months of lawlessness before Western troops arrived late that August. The English film’s introduction, voiced by Carol Reed, reminded the audience of the city’s recent glory, defined by “its Strauss music, its glamour and easy charm;” a nostalgic, pre-lapsian idyll that had almost become a guilty secret to be harboured among the ruins. For the indigenous Viennese characters, it is a real and recent bereavement, of baroque architecture and statues pock-marked by bullets and bombs; centuries of grandeur lie at their feet, while their minds are preoccupied with the need to survive, largely by black-market trading. The American narration, however, delivered by Joseph Cotten, heightened the level of threat in the city and the dangers inevitable in this thriving underworld, adding “they could get anything if people wanted it enough…” and including the warning that amateurs “don’t last long, not really.” English audiences never saw the image of a dead body floating among ice floes down the Danube, as it was considered too shocking. 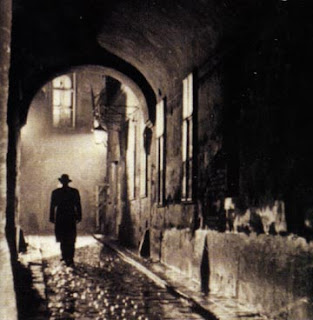 Perhaps more so than its innocent citizens, Vienna itself is the film’s main casualty of war. Views of deserted streets, ruins and piles of uncleared rubble are heightened by chiaroscuro, expressionistic shots and the tilted wide-angled camera lens of a world thrown off-kilter. Even its reputation of “easy charm” had become “bogus,” lost among “undignified ruins;” a hostile, difficult landscape, its topography deceptively hidden under “great glaciers of snow and ice.” The famous blue Danube, with all its waltzing conotations has become “a grey flat muddy river,” the old pleasure park “smashed and desolate and full of weeds.” In the darkness, new arrival Holly Martins passes the wrecked symbols of civilisation and religion; the “half-destroyed Diana baths” and “enormous wounded spire” of the Cathedral. With its cultural and historical identity shattered almost beyond recognition, it comes as little surprise to the audience that the city is also morally fractured; the familiar is twisted and dislocated; friends are not to be trusted and appearances are frequently deceptive.
The city’s austerity is all too evident; besides the ruins, the continual cold is emphasised; Martins complains of the Josefstadt Theatre being “even cold to a man in a heavy overcoat” and pictures actors going home to “coffee without sugar” and a “roll without butter:” Actress Anna Schmidt explains how the Americans sometimes throw tea instead of flowers, after a performance: Martins can’t buy a drink with his military money; a landlady is wrapped in a duvet and gratefully accepts the gift of a few cigarettes. The racketeer Dr Winkel’s waiting room reminds Martins of an antique shop; in Greene’s later novella, it reads like a reliquary of the old Imperial city: the ancient crucifixes, cardinals’ chairs, saints’ relics, statuettes and golden casket containing a shard of the “true cross” suggest an alternative preserved Vienna to that of the introductory montage and subsequent mis-en-scene. Another facet of the city emerges, part of a concealed culture that parallels Winkel’s dishonesty.
Incidental locations reinforce the pervasive malady of the urban landscape: ruins, dark rooms, alleys, abandoned cars, cemeteries and sewers frame anti-hero Harry Lime’s supposed and real death. Greene uses the Central cemetery as a reminder of the futility of life and the endurance of death; in the city, transient and difficult existence is only a prelude for the real life, echoing composer Gustav Mahler’s statement that you have to be dead in Vienna before they’ll let you live. Modern transport parodies a captive audience; for a mile, the trams run beside “an apparently endless chain of gravestones waiting for owners and wreaths waiting for mourners.” It is difficult for Martins to locate Lime’s grave, due to the snow’s “grotesque comedy” and the division of land by the four powers. As his search progresses, the area becomes more menacing; “graves lay like wolves under the trees,” the graveyard stretches through a forest, giving the feeling that beyond the misleading city lights, an ever-present darkness lies in wait. During the hunt for Lime, Major Calloway ironically reminds novelist Martins “death’s at the bottom of everything” and warns him to “leave it to the professionals.” 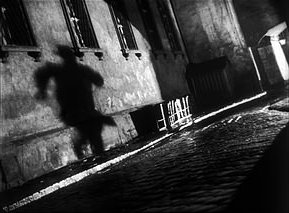 Lime’s supposed funeral is the film’s first indication of his existence below ground. His affiliation with sewers and catacombs, identifies him as a product of the city’s darkness: since his childhood association with Martins, he has undergone a rebirth and is as much part of the fabric of the changed landscape as the crumbling architecture. His adoption of the city’s wrecked topography is opportunistic; he rejects the shattered streets for subterranean access, appears in outline against the ruined skyline above the cafe like a baroque statue and haunts the urban margins like a ghost. Lime is “silent and motionless in the dark street,” which Martins almost believes to be “an illusion caused by shadow,” barely human. Perhaps the film’s most iconic images are Lime’s first and last: the chiaroscuro effects of his face lit from an opposite window and the poignant fingers curling up through the grate in their death-throes.
The film’s tense sequences in the sewers, absent of music, magnifies the sounds of running feet, barking dogs and rushing water, to nightmarish proportions. Sinister shadows rise up against the walls, the tilted camera lens and the mocking mouth-like tunnels create an expressionistic surreal world, a physical and moral labyrinth in which Lime has trapped himself. Angles and expectations are challenged; the maze has become complex and multi-dimensional, echoing the audiences’ mixed feelings towards the charismatic Lime but the outcome is inevitable. Martins’ final disillusionment identifies Lime intimately with his location; he is an “animal who creeps into the dark to die,” “he wants to die at home and the darkness is never home to us.” Yet Martins still offers a glimpse of humanity, attempting to include Lime in the “us,” but his death in the sewer, unable to reach the light and possible salvation, sets him apart from Holly and the Major and also from his victim, the valiant Sergeant Paine, whose unnecessary death finally turns the audience’s remaining sympathies.
Lime’s motivation is complex, almost Faustian. It is significant that his reunion with Martins takes place among the ruins of the funfair; a child’s game gone wrong, with its “bones sticking crudely through the snow.” The altered perspective, above the city rooftops appears initially to lend Lime a sense of superiority, a metaphor for his own conceit as he dismisses the “toy landscape” below. He is intimately connected with, altered by and part of, his adopted city.  Equally, Holly Martins’ noble, if misled, quest for the truth about Lime’s faked death and his chivalric protection of Anna Schmidt, are juxtaposed against the seamy underside of Viennese life. He can entertain the seeming opposites of pure-minded naïve idealism and a taste for the visceral, his mind always turns “towards women…after two drinks,” and fuelled by memories of “girls” he has known in Amsterdam and Paris, is drawn to Anna as “the only girl he knew in Vienna.” Later, at Maxim’s, where scenes of scantily-clad dancers were cut from the final film, Martins is musing on a girl he’d known in , his mind revolving “in circles – from sentiment to lust and back again from belief to cynicism.” Calloway’s narrative is full of Martins’ drunken exploits, established early, when he attempts to punch the Major but the policeman’s contempt of the “smoky” clubs behind “sham Eastern facades”, hung with “semi-nude photos” is offset by a grudging retrospective sympathy. Although Martins is a nuisance, Calloway’s gently patronising tone allows the audience to tolerate his naïve hopes, even pity him like Anna; “if you are in love yourself, it never occurs to you that the girl doesn’t know.” With youthful enthusiasm, Martins tries to experience all the corruption Vienna can offer but his drinking and womanising appears tame when set alongside the penicillin racket and murders committed by Lime. Martins is always on the outside; he sees the veneer of the city and dabbles his toes in it before he makes his escape. 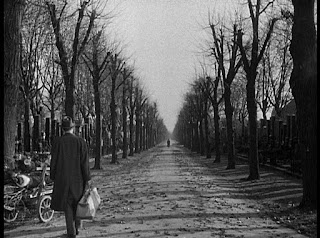 The concluding cemetery scene has an absolute finality and cinematic neatness that echoes the film’s opening; Martins is now completely alone; Anna disinterested, Lime really dead and Calloway’s job done. Greene and producer Carol Reed disagreed over the ending; the novella allows Martins to walk away with Anna and begin a new “story” but the bleak, cynical conclusion of the film leans more towards the interpretation of Martins as self-delusional hypocrite rather than loyal friend and romantic lead: it is more convincing and satisfying when Anna stays loyal to her image of Lime, despite his villainy, rather than accept the compromise of his second-rate friend. Martins’ drawn-out wait as she approaches through the avenue of trees is impressively sustained and leads the audience to expect Martins’ future to lie away from Vienna, not within it.
Posted by Amy Licence at 08:26