In the past few weeks, I’ve been disturbed by online questions I’ve seen posed about Shakespeare’s 1592 play, Richard III. These have ranged from wondering why the playwright was a liar, to a complete rejection of all of his plays by devoted Ricardians. In which case, they’d be missing out, not just on a piece of spellbinding drama but also on the bard’s unconcealed affection for the dead King. Yes, that’s right: Shakespeare actually loved Richard but he couldn’t change the course of history or challenge what he did not know. 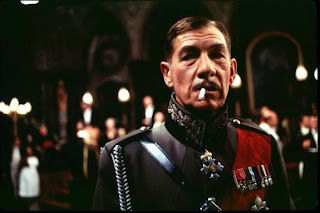 Sir Ian McKellen as Richard in 1995

No political motivation underpins the charisma of Shakespeare’s Richard at the start of this play. If the bard was simply using the dead King as a villain, following the lead of Rous, More, Vergil and Holinshed, he need not have gone to such lengths to create an engaging, charismatic figure. Rather, it seems, Shakespeare infused his Richard with a life force that went against the historical grain, compelling an audience to connect with him as an individual and drawing on the very British sympathy for the underdog that underpins much of Richard’s following today. The character’s tone is expansive, confiding, he draws us in with soliloquy and confidences. By speaking directly to the audience he makes us complicit in his exclusion from life and love; he “must prove a villain” and invites us to share his journey. And he does it with such destructive energy, such personal allure in spite of his outward deformities that we cannot help but be charmed.


No writer can escape from the times in which they lived and worked. By definition, they are a composite of the mores of the day, of cultural constructs and received wisdom. Over a century after Richard’s death, Shakespeare could no more think of questioning his “deformity” and villainy that he might have questioned the sun rising in the morning and setting at night. Equally, we wouldn’t expect him to be able to step outside the Elizabethan perception of “Moors” while exploiting them to justify the character of his Othello. He wasn’t the unwitting dupe or co-conspirator of Tudor politics, he was exploiting the popular perception of recent history for purposes of entertainment and didacticism. It doesn’t mean he didn’t believe in the popular portrayals of Richard’s appearance but he did not invent them and their robust tradition scarcely needed his endorsement by that point. In them, he saw the seeds of inevitability that he could juxtapose with a personal magnetism in order to create compelling drama. He was not a politician or a liar, he was an artist of genius. 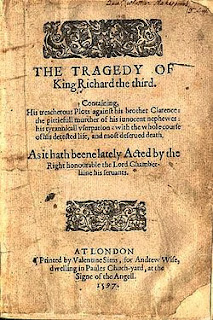 Shakespeare’s portrayal of Richard’s physical deformity needs to be recognised as dramatic rhetoric, an ideological distortion, a piece of neo-Platonic determinism, in the same way that Shakespeare had to make Othello black. It is an essential part of the Elizabethan rhetoric that encodes villainy in physicality. In fact, it illuminates for us just how far history itself had been deformed. The juxtaposition of attraction and repulsion was a moral lesson for the Elizabethans and regardless of hindsight, they all knew how it was going to end. So Richard must prove himself a villain in order to justify the inevitability of fate and the re-establishment of calm. He transgresses the boundaries established by the Tudors’ ancestors therefore he has to pay the price. Shakespeare’s message is not a political one here; Richard is merely his vehicle for the confirmation of the Elizabethan moral code. This is a literary device in line with centuries of defamation of monarchs, politicians and public figures. It just happens to have been a more successful one.


As the play progresses, Richard gradually alienates all the other characters, even his family. He interacts less and less with the audience, so our initial bond is weakened, in a process of detachment which is necessary for us to be able to accept his death. He is not our Richard by the end, he has undergone a process of transformation; under increasing pressure, the audience see him closing down. He speaks to us less, confides less and his responses impart information rather than confiding his inner landscape. Increasingly, though, we are privy to the discussion of those who oppose him; we hear fear, hatred, criticism and sense his inevitable fall, so by increments, we transfer our interest and connection to Tudor. Even when we resist this, Shakespeare forces our attention on to Richard’s adversary by the use ennobling imagery and literally, letting Tudor take centre stage. An Elizabethan audience were wired to feel gratitude and relief for the persona of the Revenger, the genre’s answer to chaos, by which order would be restored. As Francis Bacon wrote, a few years after the first performance of Richard III, man may offend laws but “the revenge of that wrong putteth the law out of office.” 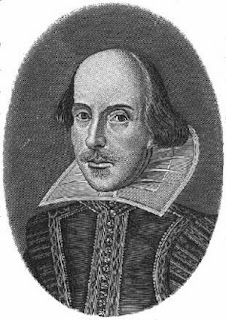 Where modern Ricardians may have fallen out of love with Shakespeare’s play is the discrepancy between our sense of morality and that of the Elizabethans. We don’t just require the victory of the abstract personification of Revenge; we have a far more sophisticated sense of personal merit and Shakespeare’s sympathetic development of Richard’s character means we bridle more when the playwright conforms to structural convention. In fact, Shakespeare makes his audience’s relationship with Richard into something of a love affair. First we are attracted, compelled, committed even, then after the initial flush of connection, we feel our hero has begun to lose faith with us, to withdraw, to disconnect and we lose ownership of him. Richard was our guide, our conduit into the mise-en-scène of the play but as the action develops, he steps back inside it and the divide between character and audience widens. He turns from hero to anti-hero, protagonist to antagonist, in order to become the sacrifice that the fates demand. It is essential for the arc of the plot that we lose sympathy with Richard by the end, even if we don’t fully side with the Lancastrian Henry Tudor, whose character is barely developed. He is merely the dramatic instrument of fate. This doesn’t mean we dislike Shakespeare’s Richard, we can still think of him with compassion, even fondly. Ultimately though, the dramatist has a higher intent. We are touched by the pathos of Richard’s death and learn the moral lesson that was a requirement of Elizabethan literature.


Shakespeare’s context compelled him to create a Richard in the model that he understood. That was his job and exposes the limits of his era. He can’t be criticised for not rehabilitating the King when he did not understand that there was a wrong that needed righting. However, there was no compulsion to develop his character along the lines that the playwright chose. It was Shakespeare’s own decision to present us with the charismatic, captivating character which, for a perceptive and informed audience, is the play’s most lasting legacy.