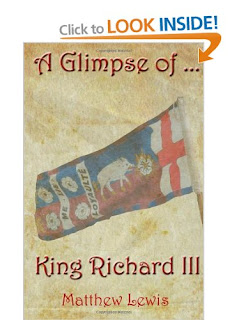 Annette Carson “A Small Guide to the Great Debate” 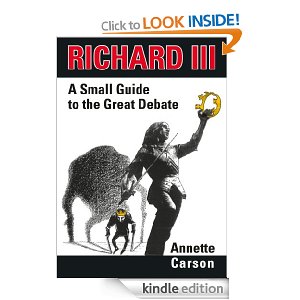 Who was Richard III? Why is he such a controversial king and what are there so many unanswered questions regarding his reign? As his bones await reburial and the dying credits of The White Queen fade from our television screens, a new fan base emerges to face the challenges posed by fifteenth century history. Two new short books by Matthew Lewis and Annette Carson attempt to give the reader some answers. For those fresh to the field, these would be an invaluable place to start, to establish a narrative of events and an understanding of how Richard’s reputation has been handled through the intervening centuries. Lewis has a law degree but his passion for the Wars of the Roses period led him to pen the novel “Loyalty” (CreateSpace, 2012) and Annette Carson is the author of a full-length study of Richard III, “The Maligned King.” (The History Press, 2009)


Lewis and Carson are upfront about their loyalties. As Ricardians, these books have been written out of a long-standing fascination with Richard and desire to locate the real man amid the controversy. Both are presented in digestible and accessible sections, chronologically and logically. It is the length of their books lies at the heart of this review. Richard III is such a complex topic, that it may actually be easier to write a long book about him than a short one; writers of shorter guides are forced to make difficult decisions about what to prioritise. The choices that Lewis and Carson made make it easy to recommend these to slightly different audiences.


Lewis’s book does exactly what it says on the tin. It provides a clear narrative of the events of Richard’s life and accession to the throne. Before the narrative gets underway, Lewis starts by defining the “A Glimpse of…” series (of which there is another, The Wars of the Roses) as “a concise view” of history which leaves out fascinating details from necessity. This should immediately signal his intended audience; the book is a good stepping stone to the more complex issues discussed in longer texts, ideal for those coming to the topic afresh. Part of the book’s bridging nature is to facilitate further study, for which purpose Lewis does provide bibliography at the end. However it is a little brief, with only five texts and a fuller bibliography would have been a very valuable addition to this book, as it works so well as an introduction to stimulate interest.


Lewis’s long-standing fascination with Richard is very clear. In fact, it drives the work: he certainly does inhabit his subject and bridges the gap between him and the reader with inclusive pronouns, inviting us to participate in the imperatives “we must” and “our collective memory,” reminding us that the reputation of this much maligned Yorkist king is a construct which we can all interpret. This accessibility is a key strength of the work.


Lewis uses unanswered questions to provoke his readers to consider a variety of possibilities. In most cases this is a successful device, a way of preventing a closed response. It is probable too, that most of his readers will be able to use these to form their own opinions. The narrative choices though, particularly the exclusion of the detail and linear fact-focus, implies an audience of beginners, without the cultural context in which to search for answers. Some may be using the text as a complete starting point, so may wish to chew the questions over until they have read on. Lewis does this best when his questions are related to human emotion, prompting his readers to consider the dynamics of human nature or predict their own responses. Academic historians might twitch a little at this technique, seeing it as the application of the modern mindset to people from the past. But Lewis has amply demonstrated his ability to consider the medieval mentality elsewhere and this would be to overlook the book’s purpose. With a short guide, designed to stimulate interest and provide facts, literally, as Lewis has described, to give us a glimpse, these initial connections must be made personal. It is through that connection that people will be enticed to read more widely.


The book does attempts to separate out some legends/myths from facts, such as the disguise of Anne Neville as a kitchen maid and the possibility of her marriage to Richard being a love match. Yet this isn’t always consistent, for example, the declaration as an absolute that Edward IV was illegitimate, followed  by the qualifier that it is unproven, also that even Richard’s detractors are in agreement on certain things like his good law making, which isn’t always the case. There is also the repetition of the myth of Richard’s mother, Cecily, standing at the cross in Ludlow to face her enemies; a stirring dramatic image, but unsubstantiated outside the biography where it first appeared in the 1950s. With space such a premium too, a beginner doesn’t need quite so much information on the Harrington family feud when other key areas are dealt with far more quickly. It could have been substituted for a section on the aftermath of Bosworth as exposed by the recent Leicester dig, as it is difficult to see how a guide to Richard adds to the debate if this evidence isn’t explored fully.


On the whole, this is a very successful “glimpse” of Richard that provides an excellent introduction to the subject. Lewis has taken on a difficult challenge in streamlining the material on Richard and has handled his subject matter admirably, making it informative and enjoyable. Writing a short book does necessitate reducing some of the more complex arguments into soundbites, so more experienced readers in the period should recognise this and appreciate this guide for standing at the gateway of Ricardian studies, to welcome more boars to the fold.


Annette Carson’s guide is more than a glimpse. With ambitious detail, she embeds a clear narrative of events amid five centuries of debate. The title is good; this really is a small guide to the great debate; the reader does get a sense that we are glimpsing into a wider world of scholarship. Really thorough for such a short book, it is informative and interesting, raising key questions of historical interpretation, such as the nature of medieval credulity, the need for the pious to draw moral lessons, the imperfect information network. There’s no doubt, though, that this is a Ricardian book. Like Lewis, Carson declares her own viewpoint from the start and, for the most part, allows for the possibility of other conclusions being drawn whilst maintaining a realistic tone about the facts. Primary sources are presented in a way that is not intimidating to those who may be meeting them for the first time.


Carson’s presentation of the debate surrounding the Princes in the Tower is particularly thorough. Initially, all the related theories and possibilities can seem confusing but this guide is very well organised and uses sub-headings and bullet points to help orientate the reader and anticipate their questions. Carson does present all sides, exploring the nature of the boys’ incarceration and the people who would have access to the vital knowledge. After this, she arrives at the optimistic, almost babes-in-the-wood theory that “they simply packed up and left as part of a pre-planned departure for some alternative location.” I personally disagree with this, as I don’t feel it could have been achieved without any record or witness to what Carson calls a “completely normal, unremarkable and unmemorable departure” and that those sworn to silence “kept their word ever after”. However, this did not detract from my appreciation of her attempts to explore the topic and rationalise the situation.


Carson did try to approach the uncomfortable topic of the Princes with imagination and empathy but the application of this was uneven, being far more liberal in the interpretation of Richard’s actions than those of his contemporaries. With Carson’s self-declared loyalties, it is to be expected that her depiction would cast Richard’s adversary, Henry Tudor as something of a foil to her subject. However, I did find it “uncomfortable reading,” as Carson herself suggested, that if the twelve-year-old Edward V considered himself old enough to be crowned king, he “was old enough to understand that intrinsic to this role was a king’s task to defend and fight for his crown, perhaps dying in the process.” Even given the brutal times, this was, I felt, an unnecessarily harsh sentiment to be applied to the young king, resonant with implications that the boy should somehow have fought back against his uncle, or anticipated and almost deserved his death for his passivity. I didn’t feel this was a necessary inclusion and could serve to alienate a number of readers.


Carson also lays blame for the failure to protect Edward V at the door of his parents- his dead father and mother in sanctuary- in her desire to exonerate Richard III. As Protector, she claims, he was responsible for the realm rather than the fate of its children. After finding the majority of the book an interesting and sincere read, the author lost my sympathy with these final comments. This had nothing to do with the difference in our beliefs, rather at the coldness of tone and lack of generosity applied to those who suddenly become pawns in her narrative, distorted in order to prop up a whiter-than-white Richard that owes little to the brutal realities of medieval kingship. Other historians do not believe that Richard killed the princes but have not sought to blame the boys themselves or their mother for their possible fates. It seems that Carson has gone too far the other way to redress the arguments of those “who see Richard only through the veil of his black legends.” Ricardian studies have moved well beyond such stereotypes but the princes have fallen victim here to an oversimplification.


Carson’s guide is definitely worth a read, as an introduction to the key issues of the debate and the problems of historical interpretation. By prefacing her section on the Princes, she does facilitate the reader to form their own conclusions, which is essential for her controversial final chapter. Her good overview won’t particularly extend the debate if you are already steeped in Ricardian literature but for those coming afresh to the period, perhaps inspired by the discovery of Richard’s bones or the recent White Queen TV series, these two books will give you much food for thought; read Lewis first to establish the narrative of events, then Carson for an overview of the controversy.
Both books can be found on Amazon.
Lewis: http://www.amazon.co.uk/Glimpse-King-Richard-III/dp/1490321578/ref=sr_1_2?s=books&ie=UTF8&qid=1379606667&sr=1-2
Lewis also has a book on the Wars of the Roses in the "A Glimpse of..." series, which provides a good clear overview to the personalities and events of the period:
http://www.amazon.co.uk/Glimpse-Wars-Roses-Matthew-Lewis/dp/1491059427/ref=sr_1_3?s=books&ie=UTF8&qid=1379606978&sr=1-3
Carson: http://www.amazon.co.uk/Richard-III-Small-Debate-ebook/dp/B00EY9QSCW/ref=sr_1_2?ie=UTF8&qid=1379606534&sr=8-2&keywords=annette+carson#_
Posted by Amy Licence at 09:10