Domestic recycling in the wills of Tudor and Stuart women.

Wills are often controversial, regardless of their historical moment.  As death approached, Tudor and Stuart women took stock of their goods and went about dividing them up among their relatives and friends. Some of their bequests can seem surprising today; not many people in the twenty-first century would think of passing on their bed, pillows or sheets, but considering that for many, this would have been the most expensive item in the house, this act of generosity gains considerable significance. Whole books have been spun out of Shakespeare’s legacy to his wife of his second best bed, playing on the emotional connotations of being “second-best” rather than simply reflecting the accessibility, ownership and disposability of the item.
Women’s wills of the late Sixteenth and early Seventeenth centuries continued a long standing tradition of passing down the tools of their trades; those household items that helped structure the day for the vast majority were used and used again. In a patriarchal world where the main viable social status for women was achieved through marriage, a “career” for the Tudor and Stuart housewife largely meant washing, cooking and childrearing. Household objects such as cooking utensils, cutlery, bed linen and clothing were not as readily available or disposable as they are today but they were often more durable. Many women’s homes were filled with inherited items and the “life” of a solid pewter saucepan might span many generations. 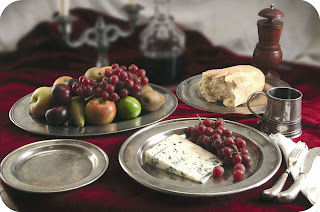 Following the usual arrangements for burial and the payment of debts, beds were the most common first item on a woman’s list. Composing her will in February 1629, Joane Nickoll, widow of a Shoemaker in Essex left her “joined (double) bedstead” with the “featherbed thereon,” two bolsters, one pillow, one blanket and one covering to her married daughter, Mary Barnes. One can only imagine the subsequent reshuffle in the Barnes household, as the various beds were reassigned, in the light of this good fortune. Joane also had furniture to give, which was rare for the time; she left two cupboards, three chests, one box, one table and a number of stools; from her mother’s kitchen, Mary received two pots, one gridiron, one spit and three kettles.
In 1621, the widow Christian Lamberd of Prittlewell left her “joined bed that standeth in the new loft” to her married son, along with a featherbed, two bolsters, two pillows, blankets and a coverlet but to his wife, she left money in order to have a ring made. In 1622, it was Alice Bird’s grandchild Frances Parker who received the featherbed currently from her parlour “upon the trundle” and the one in her kitchen, which were probably pull-out beds used for servants as well as her joined bed from over the brewhouse, also a “blew birded coverlet” (probably embroidered), fine white sheets and a casting sheet, which had been left in the hands of another local widow to pass on. A similarly lengthy and generous bequeath went to her other married grandchild also named Alice Bird.
The handing down of household objects is indicative of the tradition of mutual support that thrived among some women through mutual necessity. The female subculture of domesticity was not any form of proto-Feminism but rather a shared sympathy for the similarities in their lives. Women supported each other practically and emotionally at key moments such as childbirth, illness, death, marriage and conflict. Court Assize records state how they took each other in during times of dearth and loss, helped in delivering the babies of strangers, sheltered abandoned and mistreated wives and even physically intervened in cases of domestic violence. They would have shared a common culture of recipes, remedies, advice, support, medicinal herbs and the artefacts of their existence: small wonder that their wills are vehicles for recycling those pots and pans that, far from being trivial, marked the cornerstones of their lives.
In 1603, Thomasin Deysey left her sister Agnes Cock four pewter platters but it was her servant Thomas Munt to whom she gave a flockbed with cover and bolster. Thomasin’s stepdaughter Grace received three pewter platters whilst the rest of her worldly goods were left to be sold in order to pay her debts.  Alice Bird of Chelmsford endowed her grandchildren with an array of kitchen items, including a great cauldron with iron hinges, the newest of the two lesser brass pots, two brass possets, a pair of pewter candlesticks, a pewter chamber pot, plates and pans. To the daughters of her son-in-law, Joan Raven of Little Waltham gave one pair of candlesticks, two platters and two platters in 1591; such gifts might contribute to a young woman’s ability to marry and set up a household of her own. 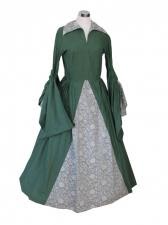 Clothing might seem a strangely intimate thing to bequeath to friends or neighbours. Obviously hand-me-downs in families were common and special items might be given as gifts but the majority of legacies in wills are for regular, daily clothing, that the recipient may well have seen the owner wearing. There were no mass-produced garments at the time; new clothes were cut and sewn by hand, woven or knitted by those intending to wear them but this would not have been frequent. The average “wardrobe” (as a collective noun, rather than piece of furniture,) of four hundred years ago would have been tiny in comparisons with today. Clothes were expensive and time-consuming to produce; costly fabrics and dyes were accessible by a small elite but even those at the top found it hard to keep up. Elizabeth’s favourite, Robert Dudley often found himself deep in debt through keeping up the appearances necessary to his rank, until he was given the Earldom of Leicester, on this day, 29 September, in 1564.
In 1578, Margaret Rand of Ashden left her two daughters “all her best apparel,” presumably for them to fight over between themselves; similarly in 1570, Agnes Rothe of Wix left her four daughter her “raiment” as well as a pewter platter and saucer each. The widow Trott of Tilbury left to her daughter Sara one “red stuffe petticoat” and one Holland smock and her daughter Mary “one cloth gown and one clothe petticoat, to make her apparell withal.” To her sister-in-law Agnes she left one “handkercher stitched without” and to her brother and brother-in-law, she gave money to buy a pair of gloves as a remembrance of her. In 1603, Thomasin Deysey left Jude Wilbure her “first gown” and Elizabeth Irelande a red petticoat and white cotton waistcoat.
Clearly, these examples barely touch the surface of a wide culture of domestic bequests that indicate an understanding of the cyclical nature of life; women passed on the metaphorical baton to the next generation of wives and mothers by endowing them with the apparatus of the bedroom and kitchen. Inscribed in the nicks and dents of each saucepan, in the tears and mending of petticoats, were the experiences of a marginal and largely illiterate group, whose stories were barely otherwise told.
Posted by Amy Licence at 08:29