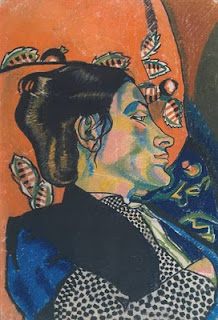 Sophie, painted by Henri Gaudier-Brzeska in 1913
When Sophie Brezska was born in 1873, Charles Darwin’s “Origin of the Species” was fourteen years old but by the time of Fernande Olivier’s death in 1966, mankind was only three years away from setting foot on the moon. The world changed beyond recognition during the lives of their generation. Their maturation was concurrent with the suffrage movement and whilst none engaged directly with the more political activities of their contemporaries, their lives reveal continual conflict between more conservative, traditional values and new codes of conduct and experimentation. Nor was their challenge to gender stereotypes constant. Each experienced specific moments when changing social and moral expectations informed their decision making and resulted in deliberate acts of defiance, which although frequently motivated by personal desire, expose a complex interrelation of individual and context. What seems most strikingly and inescapably time-specific, was the power of men to define and limit their artistic achievement: their success being as durable as contemporary masculine understanding and generosity. Sophie lived briefly with the tragic Vorticist sculptor Henri Gaudier, linking her name with his; Ida was married to the rakish and fecund Augustus John while Fernande was Picasso's first love. Each had ambitions of their own yet little of their work survives.
Separated by the passage of a century and vocal women’s movements, it is easy now to talk about wasted opportunities and romanticise these women as heroines sacrificed to male success, but as artist Edna Clarke Hall put it in response to her critics, women’s responsibilities lie equally with their children and “…in the development of the powers in herself which are her true expression.” The early twentieth century does provide examples of women who became successful artists as well as raising children: Bloomsbury’s Vanessa Bell, poetess Frances Cornford, Ida’s friends Edna Clarke Hall and Gwen Smith all persisted despite complicated personal arrangements. Yet there were also a significant number of successful women who remained single, delayed marriage, or did not have children, featuring on the fringes of these three lives: artists Ursula Tyrwhitt, Dorothy Brett, Gwen John, Dora Carrington, Nina Hamnett and Marie Laurencin; writers Virginia Woolf, Julia Strachey, Gertrude Stein and Katherine Mansfield. Of course there are many others, but although equal success in the realms of domesticity and creativity was achievable, it was significantly more difficult for women of the early twentieth century. Sadly, the most consistent and significant factor was financial circumstance: they could not all afford rooms of their own. 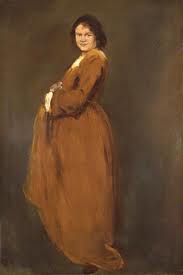 A pregnant Ida in 1901, painted by Augustus John
Possibly of the three, Ida came the closest to having what would now be considered the most successful if short lived “career”, studying at the Slade throughout her teenage years: a handful of Fernande’s pictures have been reproduced in biographies of Picasso and until recently, Sophie’s unpublished diaries and short stories languished in a Colchester library, where water damage made her French-Polish writing difficult to read: a 2008 translation and limited edition of her stories and autobiography went a long way to address this. Ironically, their posthumous existence has been allied to the fame of those who directly affected their output but it is significant that they have been remembered primarily as women and not artists or writers.
The arena of relationships and gender expectations was difficult and complicated for Sophie, Ida and Fernande: all three rejected the marital ideals of their families in order to follow their hearts. Their quests for romance were not always successful though, as the men they encountered could be predatory and selfish, exploiting double standards of sexual behaviour even when professing themselves most in love. Nor did marriage guarantee security. Instead, these women sought to forge new family units and open relationships that allowed for greater sexual and personal freedom, although the idea often proved more fulfilling in theory than practice. The casual encounters and affairs of Sophie and Fernande were strikingly modern in comparison with the expectations of their upbringing and despite remaining faithful, Ida saw her marriage become a ménage. As such, the conditions and experiences of these three women’s lives identify them as representatives of a changing world. 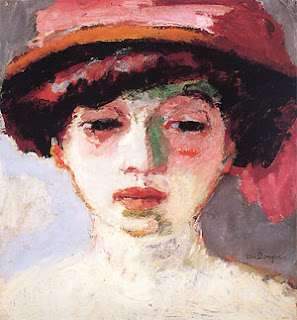 Fernande, painted by Kees Van Dongen
All three led tragic lives. Sophie's belief that Henri would be killed during the Great War, was proven in April 1915; after a peripatetic existence, teaching, writing and moving about to escape great poverty, she ended her days in a psychiatric hospital in 1925. After six years of marriage, Ida's youthful hopes were buried in drudgery and repeated childbearing; her final labour proved too much and she died in Paris in 1906, at the age of thirty. Fernande lived the longest, flitting between artists and lovers after she and Picasso split in 1912; again poverty oppressed her despite stints working for Paul Poiret and the writing of her memoirs in the 1930s; she died in 1966.
Posted by Amy Licence at 01:35