The Birth of Impressionism: private visions and public ridicule 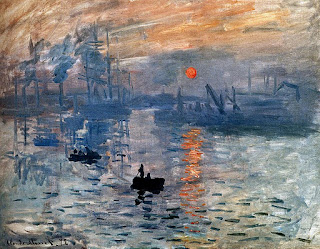 Monet's "Impression, Sunrise," 1874, which inadvertently gave the group its name.
It began in Paris, in the 1860s. A group of young artists sat drinking late into the night at the Café Guerbois, voicing their discontent over the repeated rejection of their work. France’s national Salon was governed by a conservative jury who favoured traditional subject matter, large-scale allegorical works and formal, figurative style. But these new artists dared to be different. Their brush strokes were infused with energy and movement, freely daubing and juxtaposing unexpected colours. Collectively, their work had a quick, “sketchy” or “unfinished” feel, contrary to the highly polished and finished establishment masterpieces. Instead of holing up, inside studios, they took their canvases outside and faced the challenges posed by shifting light and the vagaries of the weather. The Salon’s hegemony had produced repetitive, realistic images of acceptable themes, now disregarded by a rising generation who dared to find beauty in domestic interiors, street scenes and everyday life; hardly what the establishment considered “high art.” Among their number were names that now evoke those heady, pre-Franco-Prussian War days; Edgar Degas, Claude Monet, Gustave Caillebotte, Camille Pissarro and Pierre-Auguste Renoir. Occasionally Paul Cezanne would look in.
Paradoxically, the roots of Impressionist novelty lay in the past, where these young artists drew inspiration from the works of Dutch and English landscapists; Ruysdael and Hobbema, Constable[1] and Turner, blending the vibrancy of colour and brushworks used by Delacroix and the landscape traditions built up by the more recent Barbizon school of artists working around the Fontainebleau forest and along the Normandy coast, capturing wide vistas and domestic settings in energetic, vibrant brushstrokes and colours. Closer to home, the brazen, challenging eye-contact of nude prostitutes in Edouard Manet’s “Le Dejeuner Sur l’Herbe” had disconcerted and outraged the public when hung in the first Salon de Refusés[2] of 1863, as had “Olympia” two years later, establishing an extremity of reaction central to and almost indispensable for, the birth of modern art. 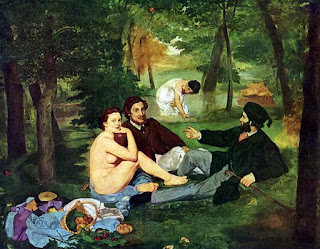 Manet's "Le Dejeuner Sur l'Herbe." 1863
In April 1874, this embryonic group officially emerged at the month-long exhibition critic Jules Laforgue called “the shock of the new…the most advanced eye in human civilisation.”[3] Based in the Boulevard des Capucines, at an old studio owned by the photographer Félix Nadar,[4] Degas was the show’s main organiser, assisted by Monet and Pissarro, responsible for the hanging of 163 works, including the placing of an “exquisitely delicate” work by Berthe Morisot[5] that shocked her former tutor into commenting that the whole exhibition looked like the product of a “cross-eyed mind.”[6] It was to prove a prophetic response. Around 3,500 people visited but disappointingly few pictures sold;[7] more people came for the experience, after reading the sensationalist reactions of the press. From , the “Times” claimed the work was “anarchic” and “Le Figaro” labelled the artists “intransigents:” the journal “Charivari” swiftly published Louis Leroy’s now infamous sketch, satirising Monet’s “Impression, ,” as the lynch pin of a laughable collection, under the heading “Exhibition of the Impressionists.” Until this point, the group had been referring to themselves as the “Société anonyme des artistes, peintres, sculpteurs, graveurs, etc” or the “Société anonyme” for short, but Leroy’s derisive term captured the public imagination, despite the group’s initial displeasure and the name “Impressionists” spread. 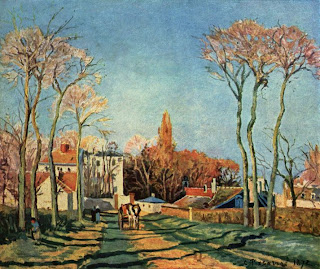 Not all the responses were negative; the majority of reviews were fairly balanced and a good number favourable,[8] even praising the artists for breaking with the “shambles”[9] the Salon had become; Leroy’s article appeared on the same day as Philippe Burty’s identification and praise of the works’ key characteristics and the artists’ success in challenging conventional ideas, published in “La Républiqe Français.” Four days later, respected critic Jules Castagnary’s article in “Le Siècle” laid the blame for their stand at the doors of the too-exclusive, reactionary Paris Salon and recognised the “common fixing of impressions” which signified for these artists, that a work was complete, further enforcing the new name. Public response was often crude, even carnivalesque: common contemporary jokes likened Impressionist methods to the firing of paint randomly at a canvas, an image that was to recur at many significant later stages of  avant-garde art.
One strength of the Impressionists, was that they did not simply replace one set of rules with another; their rejection of narrow tradition enabled a diverse range of styles to flourish, allowing for Morisot and Degas, Monet and Cezanne to co-exist. Celebrating these marked differences in style, the Impressionists established a new, subjective art which did not simply replicate what was becoming possible with the development of photography. Now the camera could capture an objective image, it allowed the artist greater scope in seeking out a more personal vision, achievable through revolutionary uses of the palette, the application of paint and importance of the individual artist’s vision. Suddenly, the artist, not the critic, had the final say; these loosely daubed canvases were finished “art” because the creators said so, regardless of any formal rules or traditions. Practitioners could begin to redefine taste, rather than display specific talents within limits, creating as many definitions as there were artists. In this, the Impressionists took an important step for subjectivity and autonomy in modern art. 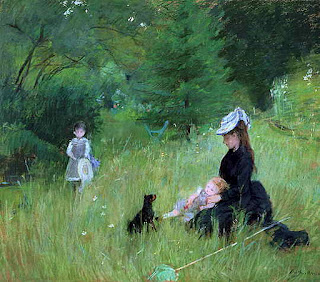 Despite mixed responses, there were to be eight more Impressionist exhibitions. The last in 1886, marked the rise of a new generation of artists, who were to benefit from the freedom achieved by their early Impressionists forerunners. Manet had died in 1883; Monet, Cezanne and Renoir declined to participate, so alongside Degas and Pissarro in 1886, hung images by young artists Seurat[10] and Signac that were to influence Van Gogh and Gauguin, prompting symbolist critic Félix Fénéon to coin a Neo-Impressiontistic, or Divisionist movement, later incorporated under the Post-Impressionist[11] umbrella. The ageing Pissarro was even drawn to emulate Seurat’s Divisionist or Pointillist technique, which had won the younger artist much attention and acclaim with works such as “The Bathers” 1883-4, “Le Bec du Hoc” 1885, “Lighthouse at Honfleur” 1886 and his circus images of the 1890s which assimilated the Impressionist’s aims and techniques, while moving beyond them. The legacy of Impressionism was a freedom of expression but perhaps more importantly, a freedom of exhibition, that sparked the powerful dialogue between modern art and the general public.
[1] Constable’s “Hay Wain” was exhibited in the Paris Salon of 1824, where it was first seen by Delacroix. Critics Delecluze and Nodier and artist Theodore Gericault had seen similar works at the Royal Academy and recognised French landscape to be “heavy, insensitive and false” in comparison.
[2] “Le Dejeuner sur l’herbe” was shown at the 1863 Salon de Refuses; “” in 1865. The Salon de Refuses had been set up in 1863 to showcase rejected material of the main Salon.
[3] Quoted in “The Impressionists.” Katz and Dars. Abbeydale Press. 1991.
[4] Nadar was the pseudonym of Gaspard-Felix Tournachon, whose photographic work featured bright, radiant light and blurred, asymmetrical images.
[5] Protegee, model and possible lover of Manet, she later married his brother.
[6] Quoted in “Cezanne” Dorling Kindersley, 1999.
[7] Degas and Berthe Morisot sold nothing, while Renoir was successful only by slashing his prices.
[8] In “Impressionism: Origins, Practise, Reception” and , 2000, Belinda Thomson provides a “rough tally” of 52 reviews; 9 neutral, 20 favourable, 18 mixed and 5 hostile.
[9] Ibid.
[10] It was Seurat’s huge “Sunday afternoon on the ” that stole the show in 1886.
[11] A term equally randomly generated by Roger Fry and Desmond McCarthy in 1910.
Posted by Amy Licence at 07:47