The King wants a wife, or does he ? 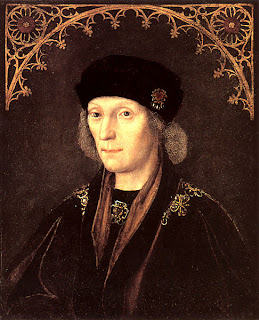 
On a blustery night in February 1503, Queen Elizabeth of York went into labour in the Tower of London. At thirty-six, this was her eighth child so she was accustomed to the paraphernalia of the lying-in chamber: the exculsively female ritual and protocol; yards of linen, the darkness and isolation, the crowded reliquary, charms, chants and prayers. Yet this time, something went wrong. On Candlemas day she was delivered of a daughter, surrounded by her women, gripped by what her contemporaries described as sudden, severe pains. Nine days later she was dead; the infant did not long outlive her. The time lapse suggests the onset of puerperal fever, often caused by the intervention of a midwife or poor post-partum care in an era that did not understand the importance of hand-washing and had no system to separate clean water from dirty. The fever can lie dormant for days, as bacteria multiplies, even if a mother appears initially well. It is an illness that would also claim the lives of Queen Jane Seymour and Katherine Parr.
Henry VII was prostrate with grief. Having already lost his eldest son and heir, Arthur, less than a year before, he had been comforted by his wife’s insistence that they were still young enough to conceive another child. Unfortunately, that pregnancy had now cost him his wife and new born daughter; a terrible blow for a still relatively young man. However, within two months, the State Papers of Spain record that he was already entering into negotiations to find another wife. Rapid remarriage was not uncommon at the time, even when unions had been affectionate and companionate; and particularly when they had not. Parish records list burials followed only a few months later by spousal remarriage. Henry and Elizabeth’s second son’s string of wives would prove this point. A king needed a consort and a court needed a female figure head. Yet Henry was genuinely afflicted by his wife’s loss and ultimately, did not marry again. Was he callous and cold hearted, as some biographers have suggested, or were these in fact, simply facets of the game of European politics ? Was Henry investigating potential wives as a tool by which to maintain or forge foreign alliances, rather than through any amorous intention ?
As early as April 1503, news had reached Spain of a projected match between the King and his widowed daughter-in-law Catherine of Aragon. As a fifteen-year-old princess, the golden-haired infanta had arrived in the country in October 1501 and married the Tudor heir, Prince Arthur. His early death left her in a difficult situation, but more awkward still were the wranglings between the two countries over the payment of her dowry. The thought of her seventeen-year-old favourite daughter being wedded to her forty-six year old father-in-law appalled Catherine’s mother. Isabella of Castile described this as “a very evil thing- one never before seen…which offends the ears” and urged Henry to send the girl home. But did Henry really intend to marry her ? The lines of diplomatic communication were notoriously unreliable and subject to rumour and misinterpretation; the supposed match may have had more to do with Henry’s hopes to extract the protracted Spanish dowry or answer the difficult questions of provision for Catherine than actual desire or intention. Being obliged to maintain Catherine’s household and wait until the twelve-year old future Henry VIII came of an age to allow them to wed, may have seemed too protracted for the King. Marriage to Catherine would have solved his immediate problem whilst opening up further potential foreign alliances for his son.
Isabella could not be put off, however, Instead, she offered her niece the Queen of Naples as a more suitable candidate. This was Joan, the daughter of her husband, Ferdinand's sister; the girl had been married to her nephew at seventeen and widowed a few months later in 1496. By October 1504, ambassador De Puebla wrote to report that he had spoken at length to the King about the match, who had expressed great “pleasure” at the thought of it and by October was questioning him as to the lady’s beauty and personal attributes. In June, he sent ambassadors to Naples, whose detailed report back gives a good indication of the physical attributes Henry required in a new bride. In response to a series of his questions, the king learned that she was aged around twenty-seven, her “unpainted” face was “amiable, round and fat,” cheerful and demure, her skin clear and complexion fair and clean. Her teeth were fair and clean, with lips “somewhat rounded” and hair that appeared brown under her headdress. It was difficult to discern her exact height as she wore slippers and her figure was hidden under a great mantle. Her arms were round and “not very small,” hands “somewhat full and soft,” fingers fair and small, of a “meetly” length and breadth, her neck “comely and not-misshapen;” there was no discernible hair on her lips and her breasts were “great and full and trussed somewhat high.” She was recorded to be a good “feeder,” eating meat twice a day and drinking cinnamon water and hippocras wine. The descriptions were apparently pleasing, as by that July, rumours were circulating Europe of a potential marriage treaty. 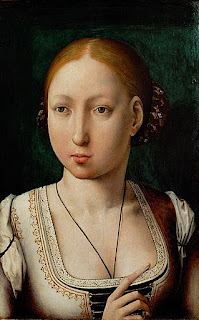 However, by March 1506, Henry was entering into negotiations for the hand of the Archduchess Margaret of Savoy, recently widowed and very rich. It would have been a powerful union for England, although the use of a rival may also have been intended to hurry the Spaniards into an alliance. Luckily or unluckily for Henry, Margaret refused him and he returned to consider another Hapsburg union. By 1506, Catherine of Aragon’s elder sister Juana had attracted the nickname “the mad.” She was beautiful but considered deeply unstable. Her almost obsessive love for her husband Philip the Handsome was complicated by his infidelity
and coldness: her maladies were more likely attributable to depression and neuroses, as she was imprisoned and manipulated by him, suffered his continual attempts to undermine her and eventually lived apart from him. His sudden death in September 1506, of typhoid fever, put her back on the marriage market, although potential suitors may have been put off by her refusal to let him be buried and have his body removed from her presence. Additionally, she was five months pregnant with her sixth child. Unsurprisingly, the negotiations came to nothing.
Henry VII did not remarry.  Increasing ill health incapacitated him for much of the remainder of his reign and no treaties were seriously entered into. It is difficult to know at this distance, just how sincere his marital attempts were; whether they were driven by personal factors or simply another facet of the complicated game of European politics. If he was looking for comfort, he might have found a willing wife closer to home, among his own nobility. Perhaps it was the very geographical and political distance between him and these potential brides that made them attractive. Every year from 1503 until his death, he would hear remembrance masses on the anniversary of his wife’s decease and continue to pay her court musicians out of sentiment. When he died in the spring of 1509, his second son acceded as Henry VIII and promptly married Catherine of Aragon, his previous sister-in-law and proposed mother-in-law. The complications arising from that union are well known.
Posted by Amy Licence at 07:11