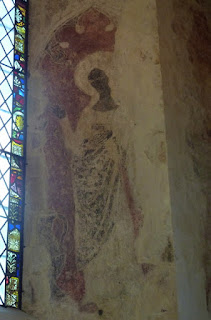 Detail from a wall painting of the Annunciation inside St Nicholas, Harbledown


On Tuesday 5 March, I published an article in the New Statesman about some information I unearthed regarding a visit Richard III made to Canterbury early in 1484. The King was described in the city accounts as having stayed there on his way to, and on the way back from, the port of Sandwich. The visit had already been identified by a previous scholar, Anne F Sutton, although I had previously seen little other non-fictional material on it. The Victoria County History series, as well as local historian Tim Tatton-Brown, mentioned that Richard stayed in a tent at Blene le Hale. Edward Hasted refers to it as the Tentorium Tent or Pavilion in the Blean. He also relates that in 1481, Edward IV made his last visit there, accompanied by his son Edward, the elder of the Princes in Tower. The present village of Blean overlaps that of Harbledown, which was the established pilgrimage route into the city and in fact, the end of The Pilgrims' Way that connects Winchester and Canterbury, as well as linking with the road from London. I discovered that in advance of Richard’s visit, the city repaired these roads, already documented as being in a poor state, partly from the wear of thousands of penitent feet making the journey down the hill to the cathedral and Becket’s shrine. 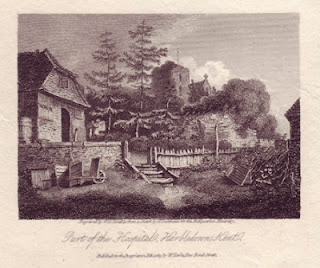 C19th engraving showing the church and wooden hospital to the left.


I am also aware of another description of this road, written in 1512 by the visiting Humanist scholar Erasmus in Pilgrimages to St Mary at Walsingham and St Thomas at Canterbury. Now, Erasmus was writing to satirise pilgrimage, which by the early sixteenth century, was increasingly coming in for criticism as a vehicle for the exploitation of travellers and the bad behaviour of those considered to be using it as an excuse for a “jolly.” However, he does provide us with an interesting picture of the road leading immediately out of the city in the direction of London, which is roughly the route of the present A2. He describes it as very “hollow and narrow” with banks on either side “so steep and abrupt that you cannot escape,” which is still true of part of this stretch of road as it bisects modern Harbledown. Erasmus then describes the Leper hospital, founded by Lanfranc, just north of the city. The church of St Nicholas, associated with this building still stands in Harbledown, with its sloping floors, allowing for regular cleaning, along with a row of hospital alms houses, although the hospital itself does not. A twelfth century Order of St Thomas of Acre, established in the Holy Lands, for the care and provision of Lepers, was named after Canterbury’s Thomas Becket, although no direct evidence has yet been uncovered to suggest that the establishment at Harbledown was part of this order. The twelfth century chronicler Eadmer describes it as being two wooden buildings, segregating the sexes, built on the hillside. In Erasmus’ day, it housed around sixty old men, one of whom would run out “as soon as they perceive any horseman approaching,” to sprinkle them with holy water and offer them Becket’s shoe to kiss. Erasmus muses whether they may be offered some spittle or other “bodily” excrements to worship before they are allowed to resume their journey.

A map or 1810/1 showing the relative locations of Canterbury and Harbledown; London is to the North West.

Of course none of this proves that Richard killed the Princes. He was a devout King and pilgrimages were undertaken by all medieval Kings and Queens as well as a large number of their subjects. He could have gone to any number of shrines to offer up his prayers, for any number of reasons. We know for a fact that Richard was present in the city, that he stayed in the Tent at Blean/Harbledown, that the route was used by penitent barefoot pilgrims and that the roads were repaired for him. Again, this does not prove guilt of any sort but it interested me in the context of other discussions relating to Richard and the Princes. I was aware of the theory, already seen as credible by many, that the boys may have died in circumstances similar to those in which Thomas Becket lost his life. Following this theory, with Becket’s Canterbury connection, it is possible to speculate that these details offer an alternative reading of Richard’s visit. 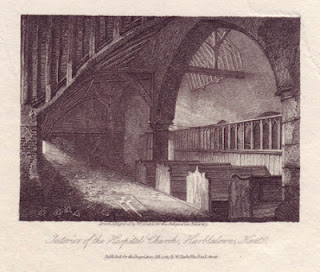 Early C19th interior of the church of St Nicholas with its sloping floor, to allow for cleaning
I offer no apologies for speculating on what “may have” been. Although amazing archaeological discoveries do still happen, we cannot all dig up a king in a car park and a valid aspect of historical study is the continual reinterpretation of known facts to seek plausible new solutions. It is possible that Richard did penance at Becket’s shrine, if a servant of his had killed the Princes. It is equally possible that he did not. It is the discussion of this as a possibility that helps clarify further understanding of his character and motivation, which is certainly not a debate with closed answers. One of the energising aspects of studying the past is that everyone can read the facts and form their own opinions, within the academic world and outside it. There is a place for the academic citation of detail and also for the popular celebration of the man in art, film, literature and discussion groups. Richard is an enthralling figure, who is rightly the subject of ongoing study and able to incite passionate defence. I am pleased to have been able to offer another possible reading of one small slice of his life. My forthcoming biography of his wife, Anne, will continue to seek a balance between the known facts and possible interpretations. I will present all the evidence and theories as fully and clearly as I can and I warmly invite my readers to draw their own conclusions from them.

Email ThisBlogThis!Share to TwitterShare to FacebookShare to Pinterest
Labels: pilgrimage, Princes in the Tower, Richard III