Down and Out in New York: the fact and fiction of Stephen Crane 1893-4 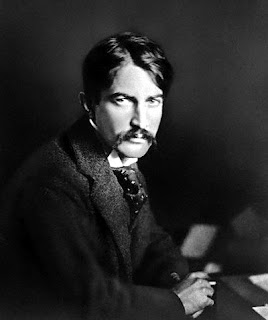 Better known for his war stories, Stephen Crane (1871-1900) also wrote powerfully about the experiences of ’s poorest citizens. His early short stories resonate with the sorrows of humanity, of dark figures huddled up on cellar stairs, on cold park benches and down filthy alleyways. His chosen locations reflect an urban brutality, the harshness of poverty and the futility of individual attempts to exercise free will. Many of his characters display a mute incomprehension at their misfortune or marginalisation, as the march of progress leaves them behind. They are anonymous and abandoned, too down-trodden to exercise any form of solidarity or resistance.

Crane had first-hand experience of the New York slums. Whilst visiting the city in 1891-2, he slept in the cheapest Bowery shelters and observed the dehumanising struggle for survival on the streets. In a 1909 study, social commentator Ignatz Nascher described the cheapest accommodation available to the destitute, from the ten cents per night dormitories where men slept on wooden planks, one row above the other, softened by straw; to the five cents “stalls” divided off a corridor, or suspended bunk-like strips of canvas. Worst of all were the flophouses at the rear of tenements, or the Municipal Lodging houses, where the poorest had to strip and hand over their clothing before being allocated a bed in a crowded room. Their garments were returned damp, crumpled and “disinfected” in the morning. Nascher found people asleep in the public toilets and the photographs of his contemporary, Jacob Riis, expose the regular use of corners, cellars, bridges, police cells, corridors, parks and saloon floors as places of rest. By Riis’ calculation, in 1890, more than half New York’s lodging houses were in the Bowery, sheltering three quarters of the homeless. These rapidly became breeding grounds “for more beggary and crime” where young men in “nine cases out of ten …turn out a thief, or a burglar…if not…a murderer.” 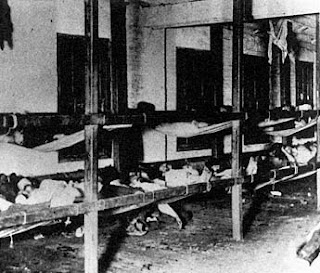 Central New York at the time was a city of paradoxes: in the Jamesian brownstone mansions of Fifth Avenue and north to Central Park, the rich lived in privilege only a few blocks away from the crippling poverty of the immigrant tenements. One of Crane’s protagonists catches a glimpse of prosperous New York society, which puts his life firmly into context. Contrasting his “old garments” with those of well-dressed passers-by, he identifies the “infinite distance” between them and the impossibility of attaining the “unconquerable kingdoms” of “social comfort” and “the pleasures of living;” neither can he understand their “confusion of strange tongues.”

The 1900 census listed nearly three and a half million people living in the Manhattan district, in an era when the city was approaching the “apogee of its self-confidence,” a vibrant cultural mix enhanced by expansion outwards and upwards. Between 1880 and 1920, two million Jews from Russia, Poland, Austria-Hungary and the Balkans established their own ghettoes in the tenements on the lower East side. These slums were among the poorest districts in the city, unhealthy, overcrowded and unsafe, although efforts were being made to bring the plight of their inhabitants to public attention: legislation in 1879, 1887 and 1895 had attempted to improve standards but the ever increasing population, coupled with inflation and low wages meant more and more people were crammed into unsanitary conditions. Manhattan’s 42,000 tenement blocks listed in 1900, housed over a million and a half people. Yet even below this, there existed an underclass, a huge mass of disenfranchised men and women, eking out an existence on the streets. 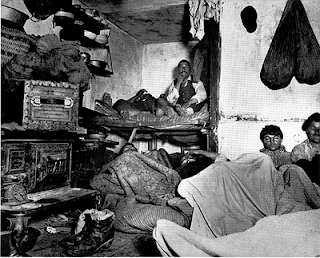 Two of Crane’s stories of 1894; “An Experiment in Misery” and “The Men in the Storm;” transform his experiences into hellish metaphors where the city and even the weather are enemies of the dispossessed. Their lowly status makes them a target for the malice of wind and rain, one among the dumb, oppressed animals, flowing like “rivers” of “aimless men like chickens in a storm.” The elevated railway squats over the street like a pre-Kafkaesque “monstrous kind of crab” and the protagonist is “swallowed” by a saloon. In some ways, the city itself seems equally, if not more alive than the anonymous crowds, in a relationship of mutual harm.

The men in the storm, in the story of the same title, huddle in a homogenous mass in the rain while they await the opening of a shelter. The snow is a malignant force, as if the crowd’s lowly status makes it a justifiable target; it “seeks out men’s meagre hiding places,” and “skilfully beats in among them,” making their faces “tingle and burn” as if attacked by “a thousand needle-prickings.” In the belief that they deserve their fate, the men are “silent” and “impassive” in the blizzard, like “statues of patience” or the animalistic “sheep in a winter’s gale,” protected by each others’ bodies. They are spectators, marginalised by the city, blaming themselves, although Crane is clear that their failure lies outside themselves; they cannot “perceive where they had failed, what they lacked to be thus vanquished in the race;” a race that is markedly contrasting with their current statue-like patience. Until the shelter opens, these men are literally and metaphorically going nowhere. 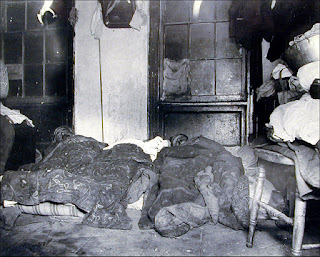 In his 1893 novella “Maggie: A Girl of the Streets,” Crane presents a young woman whose frail charms were destroyed by forces beyond her control. Maggie had many real life precedents but Crane many have drawn upon two specific girls whose stories had become urban legend. In the 1850s, Missionary workers in the Five Points district encountered Maggie Carson, disfigured by smallpox and the “sweet,” “lady-like,” “flaxen haired” Maggie Ryan, both of whom were taken off the streets and found “positions” with “good” families. Their tales were blended by the New York Tribune into that of “wild Maggie,” to underline the effects of environment upon the development of character, a theme picked up by other philanthropic writers of the time.

Cruel treatment causes Crane’s young Maggie; “a small ragged girl;” to retreat; her “side glances” betray a “fear of interruption” while she eats like a “pursued tigress,” her features “haggard from weeping,” her eyes “gleaming with fear.” Her tenement home is a hellish vision: a “dark region” of a “careening” building containing “gruesome doorways.” Odours of cooking assault the senses and overcrowding contributes to the sense of a constant audience and precarious existence: the building “quivered and creaked from the weight of humanity stamping about in its bowels.”
Sexual temptation proves to be her downfall.  The cheap Bowery beer hall and theatre create the illusion of splendour and a fictional ideal of values. She is seduced by a cheap simulacra of Parisian culture: an orchestra of women in yellow silk, boys in “costumes of French chefs,” chandeliers and “fancy cakes,” losing herself in calculation of the “cost of the silks and laces.” Her seduction is easily accomplished, followed by her descent into prostitution and death. Maggie’s suicide is associated with the “gloomy” darkness of the river. The reader’s last glimpse of her is gliding Ophelia-like among “wet wanderers in attitudes of chronic dejection,” towards “tall black factories” lit only by the occasional beam of light. Prostitution has cast her into the lowest echelons of society, among men with “blotched features,” “shifting bloodshot eyes and grimy hands.” 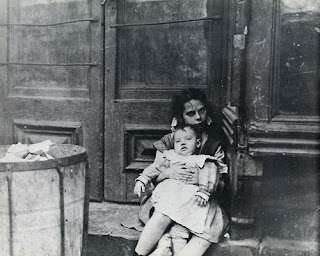 Grim as these details are, Crane’s intention was to provoke social change. In contrast with the jolly rags-to-riches tales by uplifting authors like Horatio Alger, he did not shy away from delving into the lowest depths of the city to explore exactly how terrible life had become for those on the margins of society. The “ghoulishness” some of his privileged readers accused him of, was actually bravery. The timelessness of his world-wearied, neglected characters serves as an unpleasant reminder of the inequalities of today’s society. Modern parallels of his stories can be found living in equally appalling conditions on the streets of our cities.

Crane’s life was regrettably short. He produced the novel which made his name, “The Red Badge of Courage” at the age of twenty four and succumbed to tuberculosis four years later. In that short space of time, he worked as a war correspondent during the Spanish-American conflict and lived with a brothel-keeper in Sussex, befriending Conrad and H.G.Wells. He worked feverishly, was frequently ill and poverty-stricken. His death at the age of twenty-eight curtailed the flowering of a major literary genius and potential social reformer.
Posted by Amy Licence at 07:47