Victorian Girls on the Loose in Paris.

An Adventure in the art capital of Europe.

A class at the Ecole des Beaux Arts

The significance of artistic Paris in the last decade of the nineteenth century is difficult to overestimate. Writers and painters flocked there from all over Europe in search of greater freedom and opportunity; the launch of the Salon de Refusés and proliferation of dealers and smaller galleries offered a tantalising glimpse of avant-garde success unthinkable at home.
The 1880s and 90s had seen the star of Impressionism eclipsed by the likes of Gauguin, Van Gogh and Cezanne; new techniques were being explored by Symbolists, Synthetists, Primitivists and Expressionists. Anything seemed possible in artistic terms. The exciting experiments of the Fauves and Cubists lay in the future. Others were drawn by depictions of Bohemian life by popular authors such as George Du Maurier, Eugene Sue and Emile Zola as well as the comparatively low prices of studios, alcohol and café meals. This was the absinthe era. A spell in one of the Parisian art schools was seen as the way to develop skills in paint and colour and learn from the masters long before Roger Fry’s 1910 “Manet and the Post-Impressionists” exhibition at the Grafton Galleries brought them to the attention of a broader section of English society.
The lure of fin-de-siecle Paris for young English women, was that of employment, love and artistic experience in a city where they could escape the strictures of the parental home. Three such girls who went off in search of adventure were recent Slade school graduates, Ida Nettleship, Gwen John and Gwen Salmond. Yet in 1898, they were the lucky ones. While Ida’s parents were supportive of her artistic endeavours and Gwen Salmond’s financial support eased the passage for them all, Gwen John had to fight to join her friends, falling out with her father in the process. Many women with Parisian ambitions met with initial resistance as their Victorian parents saw the trip as little more than an opportunity to misbehave. Kathleen Bruce, a sculptor who visited the city in 1901, wrote “…to say that a lass perhaps not out of her teens had gone prancing off to Paris to study art was to say that she had gone irretrievably to hell” and the undeniable freedoms encouraged by the relaxed atmosphere of late café hours was equally as attractive as the opportunity to study at one of the academies. There were understandable fears that the great masters might corrupt their students, leading at best to heartbreak in the case of Gwen John and Auguste Rodin; and at the worst, ruin. 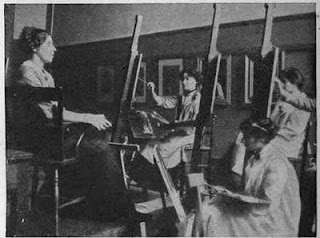 Female arts students drawing from life at the Slade, London
First, they took rooms in a cheap hotel while they searched for lodgings but quickly moved on to rooms on the outskirts of the Latin Quarter at 226 Boulevard Raspail, which Ida wrote to reassure her mother was “a very old lady style of pension…looking down on a boulevard with rather brown rustling plane trees and cafes” on the “delightful” side of the river. However, they then found what they were looking for on the fifth floor of 12 rue Froidvaux; a wide leafy avenue in the cheaper Montparnasse district, which they mis-spelt as Froidveau and mis-translated as “cold beef”. The ground floor was a café but a separate side door gave them a degree of privacy and quiet, the balcony with “good views” overlooked the cemetery and the toilet was of the old variety, which required water being thrown down it. The elderly female concierge was “very high in character” and strict about visitors; “les dames, oui, mais les monsieurs? Non ! Jamais,” information which Ida was keen to pass on again to her mother: “all this is rather amusing but it will show you it is a respectable place.” It cost 900 francs, but Ida worked out their combined finances, planned for basic living expenses and decided they could afford it for three months. What finally swung them in its favour was its proximity to the Louvre and Julian’s Academy.
Their studio was basic and had clearly seen better days but the girls had great plans; “half the wall is covered with brown paper, and when we have spare time and energy we are going to cover the other half,” Ida wrote, but spare time was lacking amid their busy schedule of gallery visits, sketches and exploring the narrow streets for shops selling art supplies. They ate at an anarchists’ restaurant, from which some of the waitresses became their models; at breakfast they read Shakespeare’s history plays and out in the street, kept an eye on Parisian fashions; evenings often became dressmaking sessions, based on what they had seen in the department stores. Gwen John produced an “Interior with Figures” which shows Ida in an historically-inspired creations, wrapped in a heavy pink shawl and full, ruffled skirt. When her father Edwin John visited, he took exception to a dress of Gwen’s, modelled on a picture by Manet, which he claimed made her look like a prostitute. 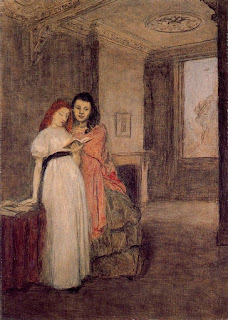 Gwen John's Interior with figures, showing Ida in the pink dress
Next, they had to enrol in an art school. The nearby Julian’s run by Benjamin Constant, was the girls’ first choice but it was very expensive and with thirty pounds remaining in her budget for fees, Ida considered the cheaper Académies Colarossi or Delécluse. However, she soon heard of the new Académie Carmen, which had opened up near the Luxembourg gardens at 6, passage Stanislas. It was run by Carmen Rossi, a model of Whistler, who would be undertaking some of the teaching: originally Rossi charged the female students twice the amount as the men, but Whistler soon discovered this and put a stop to it. At first, only Gwen Salmond with her sixty pounds for fees, could afford to enrol but she generously paid for Gwen John to attend as an afternoon student, while Ida enrolled under Laurent at Colarossi’s. Writing a pamphlet on the lure of the city in 1902, Clive Holland reflected the popularity of their choices; “a year or two at Julian’s, the Beaux-Arts or Colarossi’s is worth a cycle of South Kensington with its ‘correctness;’" by 1900, one in three students of the Beaux-Arts was a foreigner.
Perhaps the artistic highlight of the girls’ Paris sojourn was their contact with Whistler. He was coming to the end of a distinguished career (he died in 1903) and his reputation was sufficient to cause a stir among the students when the new Académie Carmen opened the autumn of 1898. The school rules were strict, even more than those of the Slade; the sexes were segregated into different studios, there was to be no drawing on the walls, no smoking, no singing, even no talking, which made it very unpopular with male students who soon rebelled against what they considered an unnecessarily draconian stance. A head student, the massier or massiere, was appointed to handle student matters and maintain the list of rules pinned to the wall: during part of 1899, this post was held by an English girl, Inez Bate who had achieved favour by painting exactly as Whistler taught. Taking orders from a young woman only irritated some of the male students further though and the class became predominantly female. Largely, the girls were happy to be presided over as part of a dedicated band; Gwen Salmond explained “Whistler is worth living for,” a “first rate master who knows how to teach,” “very beautiful and just right” and even Ida rushed to his defence, rebutting attacks on his teaching as “stupid and unkind.” In his later autobiography, her husband reminded Whistler of Ida when the two men met again in London; “I mentioned Ida Nettleship, who had been his pupil in Paris, had posed for him and was now my wife. Mr Whistler spoke of her with much sympathy, asking me to make her his compliments. Influenced by Whistler, Paris and a new found freedom, that autumn was a “most promising time,” full of inspiration and hope; in her letters home, Ida describes them as almost intoxicated with the possibilities of art; “we all go suddenly daft with lovely pictures we can see or imagine and want to do." 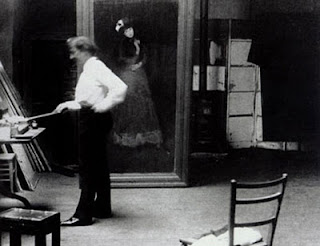 Whistler at work
Yet the fees were expensive and the girls were not making any money. All too soon, the dream had to come to an end. Reality beckoned. The Parisian interlude was never meant to be permanent, rather a glorious finishing process before the real business of life began. Returning to England, Ida was forced to confront the question of her future. Within the year, she would marry the flamboyant Augustus John, yet the marriage would be a troubled one. Paris would remain, for her, as an image of a better time, to which she longed to return. When she did go back and try to make a life for herself, a few years later, it was not with her husband, but with his other mistress and their combined brood of children.
Posted by Amy Licence at 09:04